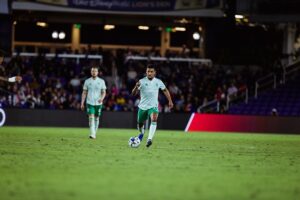 GUATEMALA CITY – Colorado Rapids and Karel Espino and Comunicaciones FC met in the first leg in the Round of 16 in the Concacaf Champions League on Thursday night. It was Colorado’s first competitive match of the calendar year.

Comunicaciones had the better start. Just seven minutes in, Andrés Lezcano had a header off a corner that goalkeeper William Yarbrough saved off the line. The ball bounced off the post, then off an attacker and wide. The Guatemalans moved the ball well, disorganizing the visitors at times.

Colorado settled down after the first 20 minutes but was not good enough on the ball. Diego Rubio and Jonathan Lewis were able to find space at times, but the team struggled to turn that into shot attempts.

Lewis had the best look of the first half in the 36th minute. Jack Price found him at the top of the box in space. He took a touch to set up his shot, giving a defender the time to get in position to block it. Colorado had no shots on goal in the first half.

Juan Anangonó misfired on a shot just before halftime, getting the ball from Kevin López with an angle to shoot.

The visitors were more composes in the second half but still couldn’t create chances on goal from the run of play. Los Cremas had a shout for a penalty in the 67th minute. Danny Wilson made contact with a player who went down in the box inside the box, but only after the ball was overplayed.

Minutes later, Esteves tried to chip the ball to the back post for substitute Michael Barrios, but the ball was too high.

The game appeared to be headed for 0-0 before Karel Espino scored on a free kick. The ball was laid off to him short and he smashed it from outside the box. It took a deflection before it got to Yarbrough and in. The match ended 1-0.

Concacafing beefore kickoff: The start of the game was delayed several minutes due to an infestation of bees on the pitch. Because it’s Concacaf.

Burgundy rust: Colorado wasn’t great in this game. They started poorly. The passing got better as the match went along, but they created almost nothing in transition or from set plays. They looked like a team that just finished preseason, playing in a tough environment. Max Alves had some good moments in the 20 minutes he played.

At the death: Outside of the first 20 minutes when Comunicaciones were taking it to Colorado, this game had no rhythm. Los Cremas couldn’t finish their chances. If anyone was scoring, it would have been on a great individual effort.