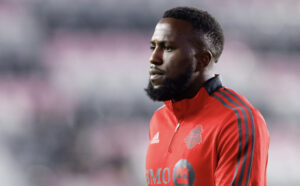 After much speculation, Jozy Altidore is now a New England Revolution player. His time in Toronto ended in a bitter fashion as he and the powers that be fell out over a matter of issues. Altidore is now able to turn over a new leaf in MLS. The experienced striker spoke to the press earlier today.

A reunion in Foxborough

As is the case with Sebastian Lletget and Omar Gonzalez, the Revolution have brought in another former player of Bruce Arena. Arena worked with Altidore back in their Red Bulls’ days albeit briefly and their paths also crossed with the USMNT. Most players that work under the legendary manager sing his praises and Altidore is no different, claiming that, quite simply, “he’s a winner.”

He also went on to say that, “Bruce is the same funnily enough, he hasn’t changed at all. In a lot of ways that’s really good. People don’t let success get to them, they stay grounded, and they stick to the things that got them were they are. He still wants to win; he’s still pushing guys every day and so I am excited to be working with him.”

86 @MLS goals.
115 @USMNT caps.
Goalscorer.@JozyAltidore is your newest member of the #NERevs pic.twitter.com/XYk9FWGpTi

As previously mentioned, Altidore experienced an uncomfortable exit from Toronto despite having been a beloved figure there. The fans still hold the same love for him and that is reciprocated: “I love you guys, I’m so grateful for everything we accomplished together, for the compassion, the love you showed my son, myself and my wife.”

Altidore was one of a number of players to exit the Canadian club in this off-season with the issues behind the scenes coming to the fore.

Altidore then went into further detail on the latter stages of his Toronto career. As a club north of the border, playing MLS was extremely difficult amidst the pandemic and having a home away from home proved particularly tough.

‘‘It was tough on the family. We just lost that rhythm. You want to be at home, you want that comfort.” The new Revolution’s no. 14 then went on to compare it to the comfort he now feels in Massachusetts already. “I’m a married man, I have to figure out what’s best for my family. My wife, she has a lot of ties in Boston. I have a brother in Boston.” The general feeling seemed to be that Altidore and his family feel welcome already.

Thanks for the countless memories, @JozyAltidore

Despite his acclaim in the sport, Altidore has always been the subject of a lot of criticism, particularly from fans of the USMNT. When asked about what he makes of it all, the former Sunderland man was very mature about it all: “For me it’s something I’ve been dealing with since I was 16, critics and naysayers and all that. Seventeen years later I’m still here so that says something and for me I want to keep building a decent career.”

What can Altidore bring to the Revolution?

Zeroing in on the Revolution and they will of course be competing in CCL after winning the Shield last term. Altidore was part of the Toronto side that were beaten by Guadalajara in the 2018 final of the tournament and it is one trophy he is yet to get his hands on.

“It’s a trophy that has alluded a lot of MLS teams. To be honest, I’ll be happy when any MLS team wins it. We obviously want to try our best to win it. I think it’s a trophy where if we want to take the next step as a league, that trophy has got to be won.” While a lot of English footballs would never support their rival sides, it is fascinating to hear someone rooting for all of those around him and this is a common belief in the States.

“You know what these guys are able to do looking at them last year,”- Altidore was full of praise for his new teammates. It would be easy enough to see this as one last paycheck for the 32-year-old New Jersey native, but his ambition points to this being far from the truth. He expressed the desire to “help this team try and win a trophy, that is what we are all here for.”

Altidore joining Adam Buksa and Gustavo Bou in the attacking player pool is a very intriguing prospect. Let’s see just how much more he has to give to MLS.

Click here to read my season preview for the New England Revolution.

The post Jozy Altidore speaks to the New England press for the first time appeared first on Last Word On Soccer.