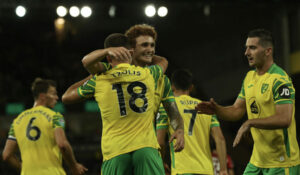 Josh Sargent’s first start for Norwich City will be one he won’t forget anytime soon.

The U.S. men’s national team striker scored twice as Daniel Farke’s side advanced into the third round of the Carabao Cup, thanks to a 6-0 beatdown of AFC Bournemouth. Sargent got the nod in Farke’s lineup for the first time since arriving from Werder Bremen and did not disappoint as the main man.

Sargent watched as his teammates connected for three first-half goals, taking a 3-0 lead into the halftime break. Christos Tzolis, Kenny McLean and Lukas Rupp all found the back of the net for the Canaries, who continued to roll in the second half.

The 20-year-old Sargent celebrated his first goal for the club, extending Norwich’s lead to 4-0 in the 49th minute. Sargent arrived in the box to poke home from close range, delivering his first goal in front of his new home fans.

Sargent would finish out the match strong to celebrate with his teammates at the final whistle. After suffering back-to-back league defeats to open its return to the English Premier League, Norwich City got to taste victory for the first time in its new domestic schedule.

“It was alright!,” Sargent said post match in a club interview. “Never a bad thing to get a couple of goals and team performed very well and the fans were amazing so it was a good night.”

Norwich City will now look to carry momentum from Tuesday’s lopsided win into a Premier League home date with Leicester City on Saturday. The match will kick off at 10 a.m. EST. Leicester City is coming off a loss yesterday against West Ham, where Ayoze Pérez received a red card.

“It was definitely a good response from the team [to Saturday’s defeat]. We’re hoping to take this momentum into the next game against Leicester and bag a few more goals.”