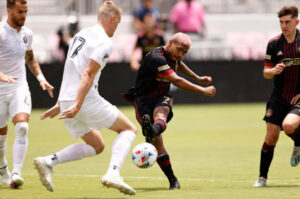 After scoring his first goal in 438 days in a 1-1 draw with Inter Miami on Sunday, Atlanta United striker Josef Martinez says he’s “close” to a return to full fitness.

The Venezuelan made his first start of the MLS season in Fort Lauderdale after coming off the bench in games against Orlando City, Chicago Fire and New England Revolution. It took Martinez only nine minutes to get off the mark, taking just one touch before firing the ball beyond John McCarthy.

Josef Martinez opens up on “suffering”

Martinez immediately ran to the Atlanta United bench to celebrate with athletic trainer Mario Cruz who, along with the rest of the Five Stripes medical department, played a huge role in his recovery.

“My first thought was to go to the doctors. They spent a lot of time with me in this recovery. They deserve it,” Martinez told reporters of his celebration, adding: “Mario and I have suffered a lot and been through a lot but I’m very happy.”

Martinez is understanding of the criticism that has come his way after a goalless start to the season prior to Sunday, with the striker also firing blanks in the CONCACAF Champions League against Alajuelense and Philadelphia Union. But he also insists people “don’t know what it’s like” to suffer such a serious injury and is focusing on building on this confidence-boosting performance.

“I understand that a lot of people have criticized me and said ‘he hasn’t scored in eight games’, I understand because it hadn’t happened but I’m also happy,” he said. “It was a very tough moment, a tough injury that I don’t think half the people know what it’s like, but I’ll take away all the hard work that I put in with the doctors, Dr. Fu, Dr. Volker, Dr. Symbas, Mario, Jack. They know how hard it was. I’m happy to score because I think that’s my job but for me, the most important thing is that my knee is good and little by little I’ll keep getting minutes because I was out for a long time.”

The 27-year-old also revealed he spent his time on the sidelines putting things into perspective, learning that “life is short” and time with friends and family is precious.

“Life is very short,” Martinez added. “Sometimes we put problems into our heads that in reality are very small. I’m a person that likes to win, but after what happened to me I appreciate my life more, my knee, my body, and I think when we’re players we don’t think about those things. I enjoy life more, time with friends, wearing my club’s colors and try to give the best I can. Sometimes it goes well, sometimes it doesn’t, but you have to enjoy yourself and try to be happy and that’s what I learned during this time.”

After scoring his first MLS goal since the 2019 Playoffs, Martinez was withdrawn in the 73rd minute but just four minutes later, Inter Miami drew level while Atlanta United were rarely able to threaten afterwards.

Martinez insists he’s “close” to being ready for a full 90 minutes, but admitted the Floridian heat weighed heavy on him at half-time.

Speaking in his post-match press conference, Atlanta boss Heinze said that Martinez’s goal was “good for the team” as well as for the player on an individual level.

Goalkeeper and team captain Brad Guzan believes Martinez’s penalty area instincts are “huge” for Atlanta United and that the striker is gaining confidence “play by play”.

“It is huge, but I think more importantly it’s huge for him to get on the scoresheet from a confidence standpoint,” said Guzan. “As you said, I think everyone knows he’s probably 100%. I think he has admitted that, but he is working his way back to 100%.

“I’ve told him to take it one game at a time, gain that confidence with every play, with every turn, with every challenge, every tackle and now we can say every goal. I thought he took the goal fantastically well. To take a touch, almost kill the ball right there, and turn and shoot, shows you where his mentality is at in terms of putting the ball in the back of the net. So, hats off to him for sure.”

The post Josef Martinez opens up on ‘suffering’ after first MLS goal since 2019 appeared first on Last Word On Soccer.