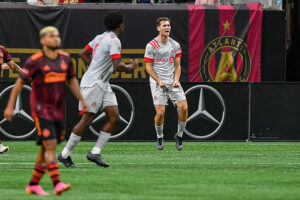 ATLANTA, GA – Jordan Purruzza scored his first-ever MLS goal at Mercedes-Benz Stadium. Toronto once again gave up the early goal. However, a combination of excellent defence and Atlanta’s missed chances gave Perruzza the chance to be the hero against Atlanta.

Jordan Perruzza makes his mark in MLS in Atlanta, Georgia

Josef Martinez’s shot went straight to Toronto FC goalkeeper Quentin Westberg in the second minute. Jayden Nelson made a terrific tackle in the fourth minute. Altidore cleared the ball. Robinson could not get to the ball. Ezequiel Barco was the one who did the delivery. Jahkeele Marshall-Rutty gave a cross to Patrick Mullins, who just was unable to get a header. Gonzalez defended Barco and blocked Martinez’s shot in the 13-minute.

15’ #UniteandConquer’s Luiz Araújo scores! He takes advantage of #TFCLive goalkeeper Quentin Westberg error and puts the ball into the back of the net! #ATLvTOR | 1-0 | #MLS pic.twitter.com/l93OXpzkzn

In this play, Luiz Araújo took advantage of a goalkeeping error by TFC goalkeeper Westberg. As a result, TFC once again gave up the first goal of the game, this time in the 15-minute of play.

Jayden Nelson received a ball from Alejandro Pozuelo but was unable to put the ball into the back of the net. Westberg saved a Josef Martinez shot in the 20-minute. Marcelino Moreno found Gonzalez but his cross was expertly cleared by Omar Gonzalez. Moreno’s shot was stopped by Westberg in the 32-minute. Altidore’s free-kick was stopped in the 38-minute. Justin Morrow made a terrific defensive play in the 41-minute. Nelson made a terrific interception from Barco in the 44-minute.

In the 48-minute, Kemar Lawrence made a terrific tackle to keep the game 1-0. Moreno’s shot was blocked by Lawrence. Joseph Martinez in the 51-minute missed the target from a Lennon pass. Brilliant defending by Julian Dunn in the 52-minute. The goal was called in the 55-minute as it was offside. Jordan Perruzza’s shot was off-target in the 60-minute and he had a chance to score in the 64-minute, but the pass did not connect. Rossetto’s shot in the 74-minute was off-target. Lawrence made a good defensive play in the 76-minute after Morrow gave up the ball. Bello’s shot was off-target in the 80-minute. Walkes defended Marshall-Rutty.

88’ #TFCLive scores! Huge congrats to Jordan Perruzza, who scored his first-ever MLS goal to tie the game! Dom Dwyer is credited with the assist.#ATLvTOR | 1-1 | #MLS pic.twitter.com/RyY5lajINK

TFC though would get a goal. This was thanks to Dom Dwyer, who made a heads-up play and gave a headed pass to Purruzza from a cross. Purruzza to his credit took advantage and took away two critical points from Atlanta. Also, Nelson should get credit for starting the plToronto will next play in the Canadian Championship semi-finals on Wednesday, November. 3 against CPL-side Pacific FC and then will close their MLS season against D.C. United on November 7. Both games will take place at BMO Field in Toronto, Ontario. Fans can watch the TFC-Pacific game on OneSoccer and Telus on November 3. The November  7 game will be shown nationally in Canada on TSN4, and will also be shown on NBCSWA and TeleXitos.

Three takeaways from the game including Jordan Perruzza:

Toronto FC’s defence was strong against Atlanta United FC. Yes, there were mistakes (including giving up the last goal like the last two games against the Philadelphia Union and CF Montreal), but they remained resolute against Atlanta. Examples are Omar Gonzalez defending Barco and blocking Martinez’s shot in the 13-minute. Then there was Kemar Lawrence who made a terrific tackle in the 48-minute to keep the game a one-minute game. He also made a good play in the 76-minute, after making a critical defensive play that changed the game.

Atlanta United FC squandered two points. This was a game for Atlanta to win. They had some notable scoring opportunities to put the game to bed. Atlanta is now in the sixth position with 47 points. They have a slim one-point lead over the New York Red Bulls. The Red Bulls defeated Montreal on Saturday. Furthermore, the remaining two games for Atlanta are on the road. Both Atlanta and the Red Bulls will play on Wednesday, November 3 at 7:30 p.m. ET and FC Cincinnati on Sunday, November. 7 at 3:30 p.m. ET. It is difficult, but still possible for Atlanta to make the 2021 MLS playoffs. The game will be shown on MLS Live on DAZN, MSG Networks, and Bally Sports South against the Red Bulls. The game on November 7 will be shown on MLS Live on DAZN, Star64, and Bally Sports South/Southeast.

Jordan Perruzza scored his first-ever MLS goal. Perruzza had a chance earlier but did not take advantage. Some people wondered if he would get another chance to score his first-ever MLS game in Atlanta. However, he was able to change that late in the game. This will be a game Perruzza will never forget as he made his mark in MLS.