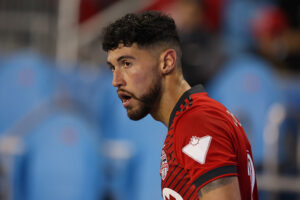 TORONTO, ON – Jonathan Osorio scored the game-winner as Toronto FC came from behind to win 2-1 over DC United. This is also Bob Bradley’s first win as head coach of TFC.

All three goals were scored from crosses.#LetsFly started the game strong at #BMOField.#TFCLive was the better team in the second half.#TORvDC | 2-1 | #MLS

Toronto FC did not start the game well as Alex Bono was forced to make two big stops against DC United. There were some bright spots though as Jayden Nelson got a solid shot off and Bill Hamid made the stop.

However, again, TFC had trouble defending in their own half early in the game. As a result, Nigel Robertha found an unmarked Russell Canouse for the goal. Robertha also had a chance in the 14-minute but was unable to get his header on target.

TFC started to find itself in the game as Jesús Jiménez’s header was just a bit high. Then in the 23-minute, they would get their answer.

23’ A nice set piece by #TFCLive! Luca Petrasso with the great cross, Michael Bradley with the nice assist, and Alejandro Pozuelo with the important finish from close range to tie the game! #TorontoFC#TORvDC | 1-1 | #MLSpic.twitter.com/yix88VhiIm

Luca Petrasso started the play with his terrific cross and then Michael Bradley flicked the ball with his head. This allowed Alejandro Pozuelo to finish from very close-range to tie the game at one goal apiece.

After the goal, however, Washington D.C. started to press with three shots. Fortunately, for Toronto, none of those shots were on goal. Lukas MacNaughton then got a shot on goal before the first half ended.

It was looking like the beginning of the first half as Edison Flores almost scored for DC United. However, his left-footed shot was just off-target.

53’ What a finish by Jonathan Osorio! He makes contact on a Luca Petrasso cross and gives #TFCLive the lead! #MajorLeagueSoccer #TORvDC | 2-1 | #MLSpic.twitter.com/xxStU6sTP6

This might be the goal of the weekend. It was great team-play as Luca Petrasso delivered a tremendous cross, just like he did for the first goal. Not only did Osorio drift to the ball, but he also slid and made solid contact with the ball, which ended up in the back of the net. This was also Osorio’s 50th goal for TFC, which means a lot for the Brampton native who has been with the team since 2013.

Salcedo made a terrific defensive play in the 68-minute of play. The only time that United looked threatening was when Alex Bono got to the ball from Grissel’s cross.  A vital play was made by Bono to get the ball and not give D.C. a scoring opportunity. Also, the TFC’s wall did a good job late in the game to block a DC United free-kick and the game was over.

Bob Bradley on Luca Petrasso: “I think Luca is showing that he’s got really good qualities … today the biggest part that you want to give credit to is the mentality in that type of tough game.”

TFC did not start the game well but was able to come from behind for the 2-1 win at home. Toronto got better as the game went along, and they really played well in the second half. It was also Bob Bradley’s first win as head coach of Toronto FC. Luca Petrasso played a big role in that game as he played a part in the creation of both goals.

Both teams will not be playing for a bit because of the international break at 4:00 p.m. ET. Toronto’s next game will be against “Financial Centre Derby” rivals New York City FC at BMO Field on Saturday, April. 2. The game will be televised nationally in Canada on TSN.

Game is Over: @TorontoFC 2@dcunited 1#TFCLive comes from behind to win their first #MLS season game this year. Bob Bradley also gets his first win as head coach of #TorontoFC. This is while #LetsFly have now lost two-straight #MLS season games.

D.C. United will also play at home on April 2 at Audi Field. They will play at 7:30 p.m. ET against Atlanta United FC. The game will be shown live on MLS Live on DAZN, NBCSW, dcunited.com, and Bally Sports South/Southeast.

Jonathan Osorio scored his 50th career goal for Toronto FC. Osorio means a lot to the Toronto sports franchise as he scored his second goal this year. He started his career with Toronto back in 2013 when TFC still had not made the MLS Cup playoffs. The Brampton native has been with the team through thick and thin as he scored a fabulous goal today.

The injury news was mixed for Toronto. Unfortunately, for Toronto, Kadin Chung had to leave the game in the second half. He also had to be helped off the field. It is unfortunate as he was one of TFC’s bright lights in the game. On the other hand, it was great to see Marshall-Rutty back after what looked like a serious injury last week in Columbus.

Luca Petrasso continues to impress. He assisted in Jesús Jiménez’s goal against the New York Red Bulls and has continued to provide scoring opportunities for his teammates. He is a player to watch, not just as a TFC fan, but also as an MLS fan.