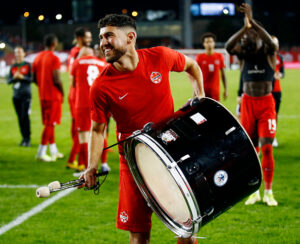 PREVIEW – Jonathan Osorio is the player that is probably most familiar with BMO Field. The Brampton native has played for the CanMNT and Toronto FC since 2013. He is a Brampton native of Colombian ancestry, as both, his parents grew up in Colombia.

Osorio grew up in Brampton, which is part of the Greater Toronto Area. This is what he said on The Brandon Gonez Show:

He was with Brampton Youth SC from 2002 to 07. He mentioned there was a rivalry with the Brampton East Soccer Club during his time there. Osorio also played for Clarkson Sheridan SC from 2008-10. A big lifestyle change happened though when he and his childhood friend, Lucas Cavallini (current forward for the Vancouver Whitecaps FC), travelled to Club Nacional de Football. Osorio was with the team from 2010-12.

Both players grew up together and played for the Clarkson Soccer club in Mississauga according to Neil Davidson of the Canadian Press. Their team toured Uruguay, which ended with both players getting tryouts with Nacional. Cavallini was impressed with Osorio and said this about his game back in 2018 according to Davidson’s article:

“He’s a really interesting player,” said Cavallini. “You don’t really get players like that in Canada — really technical. I guess his grassroots being Colombian really help.”

Jonathan Osorio and his history with Toronto FC

53’ What a finish by Jonathan Osorio! He makes contact on a Luca Petrasso cross and gives #TFCLive the lead! #MajorLeagueSoccer #TORvDC | 2-1 | #MLSpic.twitter.com/xxStU6sTP6

Osorio is playing a big part in his team’s success even now. He scored his 50th career goal last week against DC United at BMO Field. With 240 appearances under his belt and counting for TFC, he has made a permanent mark on TFC. He also recently became the only player to score at least one goal for the 10th straight season for Toronto FC. A feat that will be hard to break for years to come.

He was there before TFC made a single MLS Cup playoff appearance. Now he has an MLS Cup, Supporters’ Shield, and three Voyageurs Cups. Osorio also scored at least one goal in every round of the 2018 Concacaf Champions League. This included a late goal against Tigres UANL at BMO Field in the quarterfinals.

A big part of Osorio’s success with TFC was because of Vanney. Greg Vanney was the head coach of TFC from 2013-20.  This is according to Footy Talks Live in Michael Singh’s Waking the Red article:

Jonathan Osorio and what he means to the CanMNT

42’ #CanMNT ties it! Jonathan Osorio gets a terrific pass from Alphonso Davies and puts the ball into the back of the net! #MEXvCAN | 1-1 | #CWCQ2022pic.twitter.com/xxPtoigKCQ

Osorio is the type of player that plays very well off-the-ball. Kristian Jack of OneSoccer talked specifically about how selfless he was with his runs off the ball. Specifically, on Osorio scoring the goal against Mexico at Estadio Azteca. Lastly, this was Jack’s final comments on Osorio:

“He’s the kind of player when you watch live you just grow more appreciation for.”

Yes, Canada could have clinched their World Cup berth against Costa Rica.  However, they have another chance against Jamaica. They will play at BMO Field and the game will be shown live on OneSoccer and Sportsnet at 4:05 p.m. ET on Sunday.