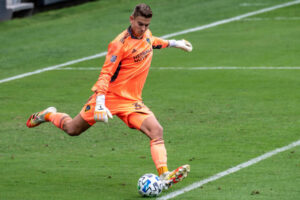 SAINT PAUL, MN – Minnesota United FC hosted LA Galaxy on Saturday afternoon in a nationally televised match. The Loons were on a five game unbeaten run coming into the day. The Galaxy had found ways to get results without Chicharito Hernandez, but were coming off a tough result against Vancouver. Jonathan Klinsmann made his 2021 debut, and boy did he make it count.

The Loons were the more positive of the two sides in the first half. The had more of the ball and got numbers forward into the attacking third. The Galaxy, on the road and again without their star striker, opted to play in transition. Dejan Joveljic made his debut for the club starting at center forward.

Just three minutes in Klinsmann made a point blank save with his right hand as the ball was crossed into the middle and deflected right in front of goal.

The Galaxy scored against the run of play with minutes left in the first half. Joveljic set up Kévin Cabral with a great pass that split the backline. Cabral dribbled forward and beat goalkeeper Tyler Miller with an off balance shot. The half ended with the visitors up 1-0.

Minnesota forced the issue and asked many questions in the final 20 minutes, and Klinsmann had an answer for everyone of them. In the 78th minute, he made an acrobatic save on Juan Agudelo who shot from outside the box. Perhaps the best save of the night came in stoppage time when he denied Emmanuel Reynoso on a direct free kick from just a few yards outside the box.

Moments later, Klinsmann had to make a reaction save on a deflected shot. That play capped off a MOTM performance from the reserve goalkeeper. The match ended 1-0 to the Galaxy as a result.

Klinsmann shines*: Klinsmann made a bunch of saves that looked great on the eyes. Minnesota had a bunch of chances, but only recorded a 1.2 xG per MLSSoccer.com with their best chance being the Agudelo shot that had a 21% chance of going in. Still given the circumstances, one has to admire with the kid did.

Galaxy bounce back: The Galaxy have been up and down without Hernandez the last month or so. They’re starting to show resilience, especially defensively. This was a much needed bounce back result after the home draw to the Whitecaps.

More worry for Minnesota: It’s been an up-and-down year for the Loons. They seemed to have mostly figured things out in terms of chance creation but the finishing has been poor. They’re not the defensive wall they were the last two years. This was another home loss in which they created a bunch of chances but couldn’t find the back of the net, a worrying trend.