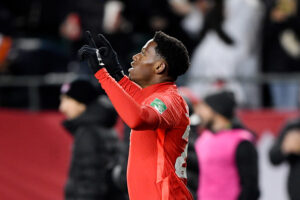 EDMONTON, AB – Under frigidly cold conditions at Commonwealth Stadium in Edmonton, Alberta, Jonathan David shined. The CanMNT took on Costa Rica in the first of two World Cup qualifying games this week in the province. It was a homecoming of sorts for their talisman Alphonso Davies who was playing in his home city for the first time.

A physical tight competitive first half

Less than three minutes into the game Davies had a great chance to open the scoring but the keeper Lionel Moreira came out to make the save. In the 10-minute, Canada earned a free-kick but again Moreira denied them the opportunity and the game stayed 0-0.

In the 13-minute off-a-hard foul from Joel Campbell, he and Marc Anthony Kay got into a bit of scrum but cooler heads would prevail. Two minutes later Davies was at it again but his shot was blocked by the Costa Rican defender and on the ensuing corner, they had a dangerous chance but couldn’t get the ball into the back of the net. Canada at this point in the game was dominating in possession 75-25 and it looked like they were dominating this game ut in the 21-minute Costa Rica had their first corner of the game but Milan Borjan made a great punch save to get the ball out of danger.

In the 23-minute there was another scrum between these two countries that involved the fourth official being forced to separate them and it was getting chippy. In the 35-minute Borjan made another great save as Costa Rica got their first shot on target. The first half finished with no goals being scored and a big 45 minutes to come for both countries.

Canada went right back to work at the beginning of the second half and got the first corner of the half in the 52-minute but it was headed out of bounds. Tajon Buchanan thought he had Canada’s first goal but his kick went off the crossbar and stayed out and he was in disbelief. Canada finally scored in the 57-minute when Jonathan David found a loose rebound and managed to get into the back of the net for the 1-0 lead (American viewers can watch the goal via this link). John Herdman made his first change of the game in the 66-minute bringing in Cyle Larin for Liam Millar looking for more offence.

The home kept looking for more goals but failed to finish great plays that had the crowd on the edge of their seats hoping for another goal and with 10 minutes left in the game Canada still was hanging on to their 1-0 lead. In the 80-minute, Canada thought they had doubled their lead off a set-piece but upon further review, the goal was deemed no good due to a handball. Four minutes of extra time was added and the Canadians would hang on for the 1-0 victory and stay in third place in the standings.

Canada earns crucial three points at home with 1:0 victory over CRC in front of 48,806 in Edmonton #CANMNT #WCQ #ForCanadahttps://t.co/XaZr477vts