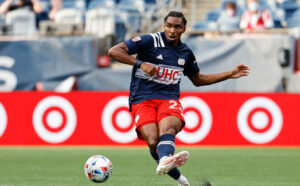 The 2022 MLS season is just days away. After their 2021 record breaking season, the New England Revolution are the team to beat as they attempt to retain the Supporters’ Shield. The major departure is Tajon Buchanan to Belgian side Club Brugge while Sebastian Lletget, Jozy Altidore and Omar Gonzalez are the notable arrivals. The latter of that trio provides further competition at centerback.

Speaking of centerbacks, Last Word on Soccer had the pleasure of chatting to Jon Bell. We discussed him growing up as a Liverpool fan, his love for Thierry Henry, the season to come in Boston and much more.

Jon Bell and his soccer background

Bell fondly reflected on his childhood when it comes to the sport. “My dad always used to play football, it was on TV, all my older brothers played, it has always been a family thing,” he said. It is often the case that people from all over the world look to the Premier League and that is the case here. “My dad grew up being a Liverpool fan so it made me one as well.”

That being said, Bell stated, “I wanted to be an Arsenal fan because I loved watching Henry play.” It was the guilt of going against his dad that saw him go with Liverpool, Along with watching the Frenchman. “Being a Liverpool fan, obviously getting to see Gerrard come into MLS was pretty cool,” Bell said.

Can we get a mic check on coach Thierry Henry?

On his love for the Reds, Jon Bell said to Last Word on Soccer, “I’ve gone when they’ve come over here (the U.S.) on those summer American tours but I haven’t been able to step foot inside Anfield yet. I’m hoping I will soon.”

Jon Bell on his first season in MLS

Bell was originally drafted by the San Jose Earthquakes but he never actually made an appearance in MLS on the west coast. When comparing San Jose and New England, he said, “it was a little different because every team has their own playstyle. Every coach coaches their team in a different way. It was an important part of my career so far, I’m still at the beginning so for me to experience what I experienced, being in an environment with professionals, travelling and understanding what it takes to stay at that level and be able to compete with other pros.”

“It’s preseason for a reason, so you can learn from this and get better come the regular season.” pic.twitter.com/kNyVg4nM0d

Bell’s debut came at Subaru Park against the Philadelphia Union, a game which ended 1-1 after late goals from Kacper Przybylko and Teal Bunbury. On the topic of this baptism of fire, the defender claimed that, “it was everything that [he] thought it was going to be.” At the same time, “I won’t lie going into that game, I was pretty nervous but after about five minutes I settled in, from then on I really locked in for the 90 minutes of the game,” he said.

A positive and cohesive atmosphere in and around the squad is often cited as being instrumental in a successful side. This is the case with the Revolution according to Bell. “There’s no set cliques, we can all sit at different tables with each other and get along and have conversations. It’s a really great thing to have,” he said.

Pre-season and the new campaign ahead

Complacency always needs to be guarded against, especially with the Revolution coming off of a record-breaking regular season. “The mentality there has been really hard, we want this season to just get underway, leave what happened last season in the past and just focus on the future,” Bell said. After the Columbus Crew were victorious at MLS Cup two years ago, they fell off to the point that last time around, they were mid-table fodder. Bruce Arena will be hoping that his side don’t suffer a similar fate.

Players are more than just that, they are people away from the field too. In terms of winding down away from training in pre-season, Bell said that they were “taking advantage of that Cali weather. We’d go out somewhere near Manhattan beach, get food and just walk around.” He may have been at a beach, but he jibbed that he’s not a beach person at all.

“When I was there I did not touch the sand once, I got close to it but I didn’t touch it.”

A little day in the life of… pic.twitter.com/CNpDdalBKX

“I always want to take notes, especially from older guys who have played at the national team level. The regiment they get into, how they take care of their bodies off of the field,” is what the 24-year-old commented on the new arrivals in the squad. As previously mentioned, there a few new faces in the building and they all bring a wealth of experience.

As well as drawing from the new faces, Bell made it clear that he’s been able to learn from those around him. When asked who really helped him through last season, Bell named a few players. “Andrew (Farrell) was one of them, I played alongside him at centerback,” Bell said. “Matt (Turner) in goal, Brandon (Bye), DeJuan (Jones), (Matt) Polster, Carles (Gil), Gustavo (Bou). Basically the whole team.”

“For me I want to elevate this year in all aspects on the field and off the field feel like now that I’ve had one season under my belt, I can mature and still learn at the same time,” Bell said.

Bell made seven appearances for the Revolution last term so there is a level of progression to be had going into next year, as was seen from the likes of Bye and Jones.

From a more general view, of the New England team as opposed to just Jon Bell the individual, the message was about focus on and off the field being instrumental. “I think the same mentality and same attitude is going to come this year like it did last year from us, take each game one game at a time and stay locked in for 90 minutes,” he said.

“It’s extremely motivating for myself because that’s something that I want for me in the future,” Bell said on the likes of former teammate Tajon Buchanan and fellow draft pick Daryl Dike securing big moves to Europe. “So when I get to see, especially teammates, guys who I played with get that opportunity and get to go overseas, I’m trying to get on that level and it’s really motivating for me at the end of the day.”

Finishing things off on a lighter note and it appears the Revolution centerback fancies himself as a decent cook. When it comes to a pre-game meal, his go-to is “a pesto, chicken pasta and I’ll probably have a regular drink with it, you know water or some mango juice.”

“I’m a chef, I can cook up some decent meals but I’m not going to lie, I’m pretty lazy nowadays,” Bell joked. “I get home from training and I obviously don’t want to move. UberEats has been taking a lot of my money recently.”

The post Jon Bell Exclusive Interview: Being a Liverpool fan, playing for the Revolution and more appeared first on Last Word On Soccer.