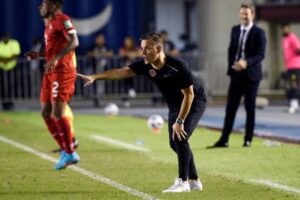 PANAMA CITY – CanMNT came to Panama hoping to finish their World Cup qualifying run with a win but ultimately lost a very tough game on the road. John Herdman and Jonathan Osorio spoke to Last Word after the match to reflect on the loss and the journey towards World Cup Qualification.

John Herdman: “This has been an amazing run to Qatar.”

” It hasn’t been easy Herdman said in his post-match press conference. ” Every game in Concacaf is tough and nobody gives you anything and it has been 20 games for Canada and tonight congratulations Panama it’s a very good team and I feel they deserved more in this campaign”.

Despite losing the game tonight the CanMNT was still able to finish first as Costa Rica was able to beat the USA 2-0 at home denying them the chance of overtaking Canada in the table.

” This has been quite a run to Qatar, tonight was a great learning and this is what Canada has done we only lost two games but we learned from every game we lost and we have come back stronger so these moments are important for us, I thought Panama was good tonight but they managed the game and gave everyone a lesson how to manage a 1-0 scoreline”.

Herdman officially became the first coach in history to lead a women’s and a men’s team to the World Cup and he was asked about it.

” I think it means to everyone that anything is possible and that’s a great story for anyone that has had to fight for an opportunity just to keep fighting and it comes with hard work”.

The head coach was able to dissect the game for the media and says they pushed hard but failed to get the win.

” We have no excuses and we did everything we could preparation wise, this World Cup qualification is a tough draw and we go away with a lesson, and the big lesson we is we have to get better in key moments and we will”.

Jonathan Osorio agreed with his coach that they are not happy with the result but there is a lot of work ahead for the World Cup in Qatar in November.

” Not the result we wanted but we came here to try and win the game and it’s a tough opponent, a tough place to play and they haven’t lost here in a long time and I thought we deserved a better result at least a tie in the end but we didn’t get it so the most important thing is that we are going to a World Cup and we finished first in Concacaf”.

With the loss but first place in the Concacaf octagonal Canada will be placed in pot 4 for the draw on Friday and Osorio says he will be following it.

” I think it is very exciting for our country, the fact we are in pot 4 we would have liked to be in pot 3 for what it means meaning that were higher in the ranking but when we get to the World Cup it won’t matter who we play against, we are going to go and try and make a statement in every game”.

The post John Herdman: “This has been an amazing run to Qatar.” appeared first on Last Word On Soccer.