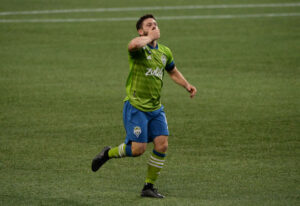 SEATTLE – It was a battle between two of the three best teams in the MLS Western Conference. Seattle Sounders FC hosted Colorado Rapids on Sunday night. João Paulo and Rave Green came in having won their last two games but had some fixture congestion due to Leagues Cup. Raul Ruidiaz was unavailable. Colorado ended their streak of draws midweek with a comfortable win over Austin FC. Clint Irwin made his first appearance

The first half was exciting. Both teams had plenty of half chances. One side was very clinical. The other was wasteful.

Cristian Roldan got things started two minutes in the game. Keegan Rosenberry tried to clear the ball from his own end line. Jimmy Medranda blocked it to Will Bruin who found Roldan making a run into the box. The midfielder hit the ball with pace. Irwin did not do well on the shot and it deflected into the side netting to make it 1-0.

Colorado responded after a few minutes with some good passing sequences. Michael Barrios and Briain Galvan did all they could under pressure, but the Rapids lacked quality on the ball and in the final third.

Medranda made it 2-0 on twenty minutes. Will Bruin delivered a perfect long ball to spring Roldan in transition. He ran all the way to the end line and crossed into the box. Paulo got an accidental touch to it, directing the ball to Medranda who beat Irwin to the near post.

Barrios nearly pulled one back later in the half. He stole the ball from Nouhou Tolo. His shot was blocked by Xavier Arreaga.

Just before halftime, João Paulo made it 3-0. Collecting the ball at midfield, he dribbled through four Rapids players and beat Irwin off his line. The ball rolled over the line with Lalas Abubakar unable to get there in time.

The second half was a mess with Rapids players playing frustrated and Seattle trying to score spectacular goals. Just two minutes in, Medranda appears to have a brace. VAR reviewed the play leading up to the goal. Chris Penso ruled that Keegan Rosenberry was fouled by Fredy Montero in the build up.

Substitute Lucas Esteves was sent off just after the hour mark. He was ruled to have committed a serious foul on João Paulo battling for the ball. The call, regardless of the 3-0 score line, appeared to be harsh.

Colorado was unable to muster a comeback down a man. The match ended 3-0.

This is UNREAL from João Paulo!!

A tale of two teams: This game unfortunately for Colorado mirrors other games they’ve played against top teams. They huff and puff but don’t have the quality in the critical moments. The opponent doesn’t play them off the park, but they rise to the occasions in those little moments. Irwin was very poor on the first two goas.

Officiating: Prior to all heck breaking loose in the second half, I thought Chris Penso was calling a good game. He let both teams play. VAR got involved on both the fourth goal and red card with Penso only going to the monitor on the first. The straight sending off to Esteves was harsh and confusing for me.