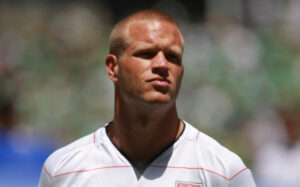 Jay DeMerit, former U.S. men’s national team defender who spent his career with clubs like Watford and the Vancouver Whitecaps, recently spoke with Last Word on Soccer. DeMerit spoke about the USMNT facing off with bitter rival Mexico, their hopes for World Cup qualifying and players he’s excited to see in the upcoming international window.

Question: The USMNT has big qualifiers going on this weekend. What are your general thoughts on the three games? What do you expect and how many points do you think the U.S. will get?

DeMerit: Well, hopefully they get as many points as they need. That’s the key part of this time of qualifying. It’s all to play for and what’s in front of them is ready. I think for them, taking it one game at a time, is something you have to do. Going into Azteca and picking up a point would be their first goal. Everyone knows it’s really hard to win in Azteca, so it’s hard to go in there and think you’ll get three points. Picking up three points is the goal.

I think to get off at a right start will be in their mindset. Even if they don’t take a poitn, even if you play well and then pick up points in your home games or more win-able games, that has to be the focus.

Q: A loss to Mexico opens it up quite a bit, for the top three seedings and the fourth place seeding too. Do you have any thoughts on the Mexico match in general? Any key players? Thoughts on the Panama game as well.

DeMerit: I think the U.S. is primed. You do a year and a half of training and playing to get to this point where you have the chance to make it. They’re going to be a little bit thin with the injuries this week. The message to the team is always clear: if you’ve got guys that are looking to play for this team, then this is their chance. You’ve got guys like [Weston] McKennie and [Sergino] Dest that would normally play, it’s time for you to show you belong here. I was one of those players that got an opportunity. I wasn’t a starter until I got the chance to start.

I think that’s always the message for some of these guys to come in and get their opportunity. I look to those types of players who will hopefully play well. Zack Steffen comes back, and your goalkeeper needs to make saves. He’ll be key tonight. It’s not easy to play in Azteca, so he’ll be busy tonight. He’s my key player to watch against Mexico.

Q: You alluded to it a bit with the injuries. Is there anybody that didn’t get called in that you would have called in?

DeMerit: No. We do have a deep team. Whoever plays will do well. I think when you have the Walker Zimmerman’s next to you, who has been there now for the last couple games… the spine of the team is key to how the team will perform. I look down at the spine — guys like Tyler Adams coming in, Zack Steffen, Walker Zimmerman — to come in and lead. Then the pieces around them will follow.

Q: The fourth place spot is really up for grabs between Costa Rica and Panama. Everyone wanted to stick a fork in Costa Rica, but they came back. Do you have any prediction for who does take that first place spot. Also, what are your thoughts on Canada being in the first-place spot?

DeMerit: Again, Panama, we have them on Sunday, so I’m hoping that it’s not as implication-based for them on Sunday, depending on how they’re game goes as well. This Sunday, for us, could be the qualifying game. And it could be for us, too. You don’t want to look too far ahead at those things. Personally, I would like for them to slip up a bit. That would give us more of an advantage for us on Sunday.

Again, I think we need to give credit to Canada. I live in Canada. I watched these players grow. I had Sam [Aka] and Alphonso Davies at the Whitecaps when I was captain of that team, so I’ve watched those kids turn into men. I have to be honest, I’m very proud that those guys have come through the way that they have, how they stepped into the professional game and how they’re playing well for their clubs and reciprocating that for their country.

So for me, they deserve to be at top spot, to be honest. They’ve played the most consistent soccer during qualifying. They deserve to be there. Enough credit has to be given to [Canada head coach] John Herdman. He was questioned if he could do it with the men the way that he did it with the women’s team. He has more than delivered. He is a guy that beliefs in his team more than ever and gets people behind him. People guy in to his tactics and who he is as a person. And that’s showing.

Q: If the World Cup were to happen tomorrow, and you had to pick a favorite to win, whose would your pick be?

DeMerit: I personally like England because I spent nine years of my life there. I have a lot of friends that still live there and, of course, play for Watford over in England. They’re my European team… I’ll say they’re in the top as well.

Q: You were on the national team, and you’ve been in those games against Mexico. If the U.S. wins, it will be the first time that they’ve beaten Mexico four times in a row. What are your general thoughts on the rivalry from both your experience as a player and what you see now?

DeMerit: I think it’s one of the greatest rivalries in all of sports. I’ve been fortunate enough to live in those stadiums when they happen. The electricity is insane and the passion is real. You have to see it to believe it, in all honesty. When you feel the rivalry in the stadiums and you go into Soldier Field in Chicago and 40,000 fans are in green, you know that the rivalry is serious.

For me, and as a player, that’s what you want. You want to go in the biggest stadiums in the world and feel pressure. Azteca provides that pressure better than any stadium I’ve ever been in my whole career. There’s no greater challenge for a player than going into that stadium and pick up points.

But that’s why we do it. I think that will be Gregg Berhalter’s message tonight: “Can we do it? Can we be the first American team that has won here?” If those players believe yes, then history is in the making. That’s how you continue to advance your country, your nation, to challenge for the World Cup. You become a team that win in those types of stadiums. Those are the teams that have legs and longevity. I think that should be the goal for the USMNT right now.

Q: Should the United States qualify for the World Cup, could you see them hanging with the big boys of the tournament?

DeMerit: I think we’re getting there. I’m not sure if we’re quite there yet. But we’re good enough to get out of our group and challenge for a semifinal and quarterfinal. I would like to see a little more consistency from our players.

But what I love to see is that our players are performing for big clubs. And that’s happening now. That’s one of the biggest credits we can give our national team players. These guys aren’t just signing with Chelsea, they’re winning Champions League trophies with Chelsea. They’re not just signing with Juventus, but lifting trophies and scoring goals for Juventus.

Our best moments for the national team are when our players are leading and winning with their club teams. To see that in this group, it’s exciting. Where they go is to be seen. If they keep being consistent and constant contributors for their clubs, as a collective, the U.S. has the chance to challenge for a World Cup championship.