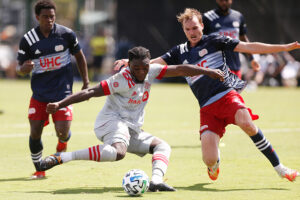 Javier Pérez gets his first-ever win as head coach of Toronto FC. TFC has also finally done it! They have ended their six-game losing streak by winning against the New England Revolution. A huge part of that was their dominant first-half performance. Three goals were scored, and Toronto took full advantage of their opportunities.

The Toronto FC players stepped up with some great defensive plays and goalkeeping late in the game. #NeRevs did not convert on their chances in the first half.#NEvTOR | 2-3 | #MLS

Yeferson Soteldo took full advantage of New England Revolution Brad Knighton’s mistake. As a result, TFC adds one early in the ninth minute. Then in the 15-minute, Alejandro Pozuelo gave a terrific pass to Kemar Lawrence. Lawrence then made a great run and shot the ball past Revs goalkeeper Knighton for the goal.

In the 17-minute, Pozuelo’s shot was saved. Ayo Akinola had a particularly good chance to score in the 33-minute, but his shot was also saved. Both Marco Delgado and Tsubasa Endoh got shots in the 39-minute. However, both shots were off target.

What a goal by #TFCLive player Tsubasa Endoh! His shot from outside the box ends up in the top left corner.#NEvTOR | 0-3 | #MLSpic.twitter.com/etE2MUbgEg

Maybe the goal of the week was in the 24-minute. Endoh from just outside the box got a terrific shot off. Goalkeeper Knighton had no chance of stopping the shot, which ended in the top-left corner. TFC took a commanding 0-3 lead. It in fact though ended up as the game-winner as the Revolution came back in the second half.

The New England Revolution caught up with Toronto FC thanks to two set-pieces. This included a fantastic free-kick goal by Carles Gils and a terrific header by Adam Buksa. The game was then a one-goal game. In this game, TFC made two great defensive plays. One was in the 89-minute when Omar Gonzalez made a vital interception to prevent a very probable game-tying goal. Pozuelo also made a similar defensive play in a less threatening scoring position.

The biggest moment in the match happened n the 90+4-minute. TFC goalkeeper Alex Bono made a terrific save to preserve TFC’s lead. It was a moment Toronto had needed this season.

Yes, as mentioned before, TFC made some great defensive plays and Bono made a terrific save late in the game. However, the defence and Bono looked a bit shaky throughout the game. Also, the Revolution had several chances to score in the first half.

They in fact had more shots than Toronto in the first half. Most of their shots came in the first half. It started off with Adam Buksa. He got a header off from the centre of the box. Unfortunately, for Buksa, his header went straight to TFC goalkeeper Bono. Gustavo Bou would then get two chances to score. In the 27-minute, Bou’s header was close but off-target. His shot in the 31-minute was also off-target.

Buksa’s header from the centre of the goal was saved in the 34-minute. The big moment though came in the 37-minute. Bou with a thunderous strike had his shot stopped by the post. It was a terrific shot that beat goalkeeper Bono. Unfortunately, though, it did not go into the back of the net.

An important win for #TFCLive, who ended their six-game losing streak. Congrats to Javier Pérez, who got his first-ever win as head coach of Toronto FC.

Congrats to Javier Pérez on the personal accomplishment! He gets his first-ever win as head coach of Toronto FC. He will be sure to remember this for many years to come.

Coming home on a high note

The Revolution remains at the top of the Eastern Conference with 24 points. It is important to note though that Orlando City SC has played one less game and currently has 21 points.

A big reason for that though might be the 7-1 loss TFC suffered against DC United on Saturday. Toronto has also not played good defence this season. This was even true on Wednesday as they almost gave up a three-goal lead to New England. It is important to note though that the Revs are first in the Eastern Conference. Beating them at Gillette Stadium in New England was a big deal for TFC and its staff.