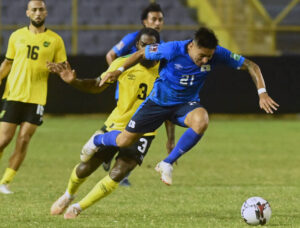 El Salvador are mathematically eliminated from World Cup qualification after a 1-1 draw at Jamaica. Eriq Zavaleta opened the scoring in the first half, only for Andre Grey to level the score. The long drought continues for El Salvador, while Jamaica will wonder how they didn’t win this one.

Jamaica fielded a formidable lineup for this one. Andre Blake was main stalwart in goal, with veteran Adrian Mariappa in charge of the defense. Ravel Morrison was in midfield as the creative force. He was surrounded by the electric pair of Leon Bailey and Javain Brown. No Michail Antonio, so Andre Grey led the attack alongside Daniel Green.

El Salvador came desperate to win and have other results go their way. Mario Gonzalez was in goal, led by a five-man defense including the returning Eriq Zavaleta. Houston Dynamo midfielder Darwin Ceren anchored the center of the park, while Nelson Bonilla led the line up front. The big omission was the young dynamic Enrico Duenas, who didn’t make the trip.

First Half: Eriq Zavaleta scores a historic goal for El Salvador in Jamaica

An early Jamaican corner was blocked and ultimately led to a goal kick. Leon Bailey had a golden chance to put Jamaica in front. After sitting down the goalkeeper, his touch took the ball wide and was closed down by Rodriguez.

Orellana launched a shot from distance that was tipped over the bar by Blake. The ensuing corner was flicked high of goal. Minutes later, El Salvador took the lead. From a corner kick, Eriq Zavaleta rose up to head home the opening goal past Blake. It was the first goal in Jamaican soil since November 1992.

Ravel Morrison hit the post with a rocket but couldn’t equalize. Nelson Bonilla went off with an injury, 19-year-old Styven Vasquez entered. The halftime whistle blew and El Salvador held a slim advantage. Jamaica were still in the game, hitting the post and pinning La Selecta back for stretches of time. The second half was shaping up to be nervy in a must-win game for Hugo Perez.

Jamaica kept piling on the pressure but couldn’t score. Joaquin Rivas and Miguel Lemus came on for Jairo Henriquez and Alexander Larin. Daniel Green came close to scoring but was denied by a great Gonzalez save over the bar.

Green was subbed but then Andre Grey leveled the score. He received a low cross in the six yard box and converted past Gonzalez. It had been coming, as the Jamaicans sent wave after wave of attacking threat. Calvillo and Orellana replaced by Martinez and Santamaria. The full time whistle blew in an entertaining draw.

El Salvador eliminated. The long drought continues, stretching back to their last World Cup in 1982. It’ll be 44 years, more than a generation have yet to see La Selecta play in this most honorable competition. It had been a fun, at times rewarding, campaign that saw progress in this soccer program. The goal is now much more clear: they must qualify for the World Cup in 2026.

Jamaica should’ve won. With a total of 17 shots, the Reggae Boyz blew numerous big chances and will feel they should’ve gotten more out of this game. Maybe Michail Antonio would’ve done the business, but regardless, it’s two points dropped in a game that could’ve went their way.

Both teams now playing for pride. Both teams eliminated, El Salvador are home to Costa Rica before finishing up in Mexico. Jamaica head to Canada before concluding business at home to Honduras.