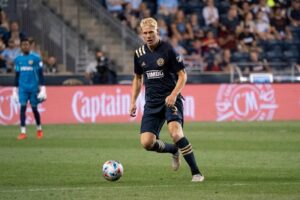 CHESTER, PA – Jakob Glesnes is the hero as his 123rd minute wonder goal saves the Philadelphia Union and eliminate the Red Bulls in the MLS Cup Playoffs. The game lacked much sharp chances and goals until the very end. It’s another heartbreaking end for the New York Red Bulls, while the Philadelphia Union move on to play either Nashville SC or Orlando City.

Andre Blake is in goal for the Union as per usual. Kai Wagner and Alvas Powell are the fullbacks, while Jack Elliot and Jakob Glesnes are the center backs. Alejandro Bedoya captains the side in midfield along with Jose Martinez and Leon Flach. Daniel Gazdag and Paxten Aaronsen lineup behind striker Kacper Przybylko in attack. Strikers Sergio Santos and Cory Burke are on the bench as well as the silky Ilsinho. Jamiro Monteiro and Olivier Mbaizo are both out due to health and safety protocols.

The in-form Carlos Coronel is between the sticks for New York. Andrew Gutman, Andres Reyes and Sean Nealis make up the three-at-the-back defense. Captain Sean Davis partners Dru Yearwood in the middle of the park, Kyle Duncan and Tom Edwards are the fullbacks. Patryk Klimala is on the bench, which means Fabio starts up top. He is supported by Cristian Cásseres Jr and the returning Omir Fernandez. Caden Clark is amongst the subs.

First Half: Fouls and flows in a “car crash” first opening 45 minutes

A very good opening five minutes for New York as they won the ball and won fouls in dangerous positions. Union get a big chance to go in front, but Coronel was equal to it with a nice save. Dru Yearwood earned the first yellow card of the game for a hard foul on Aaronson. There were very few clear chances for both teams in the first half. The Alvas Powell volley was saved in one end, while the free Omir header went wide and ended up being a corner kick which led to nothing.

This game has gone as expected. Tons of breakups and challenges, not an inch given in the midfield, and a knock-down drag out ensued. A few pushes and shoves broke up the flow of the game after the ball. Broadcaster Steve Cangialosi summed it up nicely.

More fouls (13) than shots (8) in the opening 45 minutes, and one shot on target for each team. The flow of the game changed hands as every team tried to muster a bit of possession. One yellow card so far is surprising given the several fouls that occurred, referee Fotis Bazakos has had his hands full. Both teams are having trouble getting service to their strikers, the wing-backs are enjoying success on the flanks. Goalkeepers had very little to do in this cagey and tight first half.

Second Half: Much of the same as we go to extra time

No subs for either team to begin the second half. Yellow card for Andrew Gutman for holding the ball despite Martinez shoving him to the ground. Seconds later, a yellow card to Tom Edwards for a foul and then kicking the ball afterwards.

The Union looked to have scored but Sean Nealis clears, which led to an Aaronson shot wide of net. Patryk Klimala returns and entered the game for Fabio. Sergio Santos returns and enters the match for Aaronson. Caden Clark came on for Omir Fernandez.

Jose Martinez received a yellow card for kicking the ball after a whistle. Andres Reyes also got a yellow card for bumping into Santos. There have been so few quality chances for both teams. Philadelphia nearly took the lead late, but the cutback from Santos to Kacper sailed over the cross bar from six yards out.

Cory Burke and Jack McGlynn entered for Kacper and Flach respectively. Five minutes of added time were given, nothing happened so we go to extra time. This second half more or less followed the patterns of the first half. It was tight, chippy, more last-ditch defending and some brutal refereeing that broke up the flow of the game way too much. Only 10 shots, but none on target, says all you need to know.

John Tolkin enters the match for Reyes, Gutman will act as the third center back. Klimala has an excellent chance to put New York in front but dragged his shot wide of the far post. Seconds later another chance came his way and the shot was parried away by Blake. No chances or shots in the first 15 minutes for the Union, the Red Bulls wasted theirs.

Coronel denied Santos from point blank range after the square ball by Burke. One of the saves of the year. Jesus Bueno replaces Bedoya, the Union captain was limping after playing such a long match. Kyle Duncan came closest to scoring in the frame but his low drive hit the far post and rolled out. Danny Royer and Youba Diarra came into the game for Caden Clark and Dru Yearwood. This comes with a view to penalties on the horizon. Burke shot his effort wide of goal after the ball scrambled in the box. Three minutes of added time given.

And in the 123rd minute, Jakob Glesnes off a recycled ball from a set piece volleyed one from distance to give the Union the win.

A game that had it all. It wasn’t the prettiest of games, but it had it all. Fouls, chippy moments, extra time, a stoppage time winner. The second playoff meeting between these two teams in three years, and it was another good one.

More playoff heartbreak for the Red Bulls. This game ranks up there as one of the most heartbreaking losses in team history. To lose in that fashion, against the Philadelphia Union, in Philadelphia, makes any NY/NJ fan of this team sick to their stomach. While the run to make the playoffs was fun, the end to it is brutal in every way. The missed chances throughout will haunt this team in the offseason. Then again, it’s a clear sign of the work required to do in the offseason.

The Philadelphia are poised for a deep run. Fans will be raring for the next playoff home game, against either Nashville or Orlando. Jim Curtain’s side will be favorites in that game, and can go far. They have the tools to even take on New England, the Philadelphia Union survive and advance to the next round.