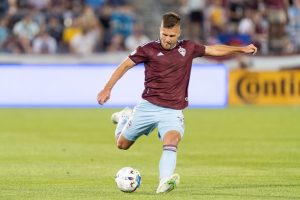 COMMERCE CITY, Colo. – Colorado Rapids hosted Vancouver Whitecaps on Saturday night. It was a must win game for both teams, who were below the playoff line entering the day. A rainy day and several staged concerts saw the pitch at Dick’s Sporting Goods Park in not great condition.

Colorado were the protagonists to start the game until the 9th minute. Lalas Abubakar ran down a long ball in the Colorado box, but fell down. Brian White collected the ball and slipped it past William Yarbrough to score.

Gyasi Zardes made it 1-1 in the 21st minute. Playing out of the back, Jonathan Lewis got into space. He crossed to Felipe Gutiérrez, who tapped it to Zardes for a better angle. Zardes found the far inside netting.

Diego Rubio made it 2-1 in the 33rd minute. Lewis drew a penalty from Ranko Veselinovic. He cut inside and was shouldered to the ground by the Serbian. Rubio went top left corner to emphatically score. The half ended 2-1.

This is so egregiously wrong, I’m still stunned.
This bad call has the potential to end a team’s season. #VWFC pic.twitter.com/cndwjNnBZz

The second half was open in that both teams got the ball in good areas. Threatening shots on goal were lacking though. White had a good header chance on the hour mark that was saved. Pedro Vite hit the crossbar minutes later after he had a shot blocked at the top of the box.

The game seemed dependent on the next goal. It would come in favor of the Pids. Substitute Jack Price switched the pitch to Lewis in the 75th minute. Lewis, playing on his off wing cut inside and blasted the ball upper 90 past goalkeeper Cody Cropper. The match ended 3-1.

PK controversy? A makeup call? Vancouver was not happy with the penalty call, which could have been a foul from outside the box. Vancouver didn’t have their best attackers available in this game, but this call made it tough. Rapids manager Robin Fraser previously complained about penalties against his team. Was this 50/50 a make up call?

“The decision was not overturned because the referee received a ‘check complete’ message from the VAR,” was the response to the pool reporter question about the play.

Rapids build: Colorado were encouraged by their last game, a 0-0 draw at D.C. United. They needed to build on this. Other than a defensive mistake leading to the goal, possibly due to the poor and wet pitch, they contained the Caps. The attack scored. Much needed progress as they try to make the playoffs.

“The engagement from start to finish was excellent. Even when we gave up a soft goal, it didn’t change anything. The guys mentality was really good. That’s a big reason as to why we won. All we can do at this point is control that. In that sense, this was a continuation of the D.C. game. We worked our way into this game,” Fraser said postgame.

Jack Price returns: Price returned off the bench in the 68th. He had the assist to the Lewis goal. It was his first appearance since August 6 due to a chest injury. He’d previously not played since mid-June due to a calf injury.

“Tired. It’s been a while. It felt fantastic to be out there. Feel the competition, feel a tackle. To win, even better. It’s been tough. Last game was unfortunate to get injured, cracked rib, punctured lung, whatever it was,” Price told Last Word.