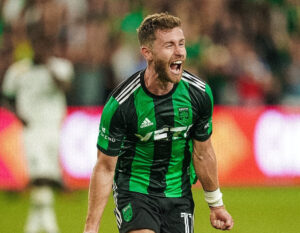 AUSTIN, TX – Pregame, the figure of ‘70 minutes’ loomed over Austin. Their first two games at Q2 Stadium had ended goalless. The previous MLS record for a new stadium not seeing a goal was held by New York Red Bulls in 1996, who went 71 minutes into their third home match before finally registering a goal. That was so long ago, the Red Bulls were called the MetroStars. Verde were desperate for their first Q2 Stadium win; that desperation turned into execution.

Similarly to the previous game against Columbus Crew, ATX started brightly, creating chances within the opening minutes. Livewire Danny Pereira, returning to the starting line-up for the first time since Nashville on May 23, drew a foul that gave Thomas Pochettino his first freekick sight of goal this season. Toto’s effort went wide. But it was a warning of more to come.

Jon Gallagher got a couple of sights on goal, as did Diego Fagundez, and rampaging left-back Zan Kolmanic. Pereira saw a beautiful volley from outside the box palmed away. Several dangerous corners flashed through the box needing only the slightest touch to give Austin the advantage. The Timbers struggled to hold on to the ball. The couple of occasions they were able to advance and Verde keeper Brad Stuver was called to action, he proved equal to it.

Then…history was made! On 28 minutes, Irishman Jon Gallagher connected with Tomas Pochettino’s low cross, steering the ball into the far corner. Cue chaos! The Treehouse exploded as the pent-up anxiety of over 200 goalless minutes was released. Gallagher went wild, his teammates ran to celebrate with him, and the Verde Vanguard screamed, cheered, and sang their joyous hearts out.

Diego Fagundez, his name already in Austin FC folklore, wanted in on the party. He and Cecilio Dominguez combined to make the most of poor Portland defending. Fagundez was as cool as you like as he swept the ball past Timber’s keeper Steve Clark.

The Timbers were able to pull one back right before halftime after flat-footed defending down Austin’s left. A tidy right-wing cutback from Loria was met with an equally tidy roof-of-the-net finish from Ebobisse at close range.

With it now being a one-goal game, the Timber’s would be expected to push hard in the second 45’. Instead, Austin persistently probed and pressed in their hunt for a third. Jon Stroud replaced Gallagher to provide an energetic outlet down the right. Fagundez and Pereira continued to conduct the attacking orchestra, along with Pochettino, arguably having his best game in Verde.

Captain Alex Ring finally put the necessary daylight between the teams on 77 minutes with a magnificent glancing header off a Cecilio Dominguez freekick. And when veteran Hector Jimenez jinxed his way through the Timber’s defense on 81 minutes to put Austin 4-1 up, Austin FC had secured their first Q2 Stadium win.

@AustinFC‘s first win at Q2 was

The Dam has Burst: Austin are off the scoring mark at Q2, and deservedly so. They’ve been the better team in both of their previous two home games, and tonight, finally, got their just desserts.

Precocious Pereira: Gallagher was the goal scoring hero, and Fagundez was at the center of much of what ATX created offensively – but Pereira once again showed maturity beyond his years and limited MLS experience. His willingness to carry the ball through lines distinguishes him.

Toto-rific: The Argentinian DP had his best game in an Austin jersey. Pereira’s return likely freed him up from defensive duties somewhat, and he made the most of it, displaying the offensive creativity ATX fans have been crying out for.

Has to go to Head Coach, Josh Wolff, and history-maker Jon Gallagher.

Wolff: “Tonight is extremely significant. We had Anthony (Precourt) and Eddie (Margain) in the locker room after the game, and they brought us all here. We have this unbelievable stadium, they delivered us this fantastic community, the fans…everything’s been right, and tonight everything went right. It’s a momentous occasion. It’s going to be very memorable for me, and I hope for all of these players and fans, for this community’

Gallagher: “It’s insane. It won’t sink in for a while. There’s a lot going through my head at the moment. I was really blessed to have my family and some of my best friends watching. Just…really cool.”