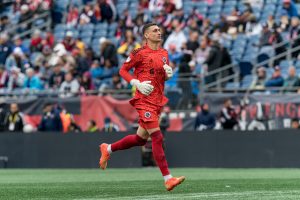 A trip to Chicago is all that remains for the New England Revolution. They may have beaten Atlanta United in their last outing, but playoff is out of reach now regardless. There haven’t been many positives for Bruce Arena but one of the few silver linings is the signing of Djordje Petrovic. The Serbian shot-stopper has been named as the Revolution’s team MVP as voted for by the fans and his teammates.

The Man of the Moment is Djordje Petrovic

It was a real sink-or-swim moment when Matt Turner sealed his move to the Premier League. Turner joining Arsenal was thoroughly deserved and the Revolution organisation was very happy for him. At the same time, it left the club in need of a new goalkeeper. He was one of the best in the league and so Arena was left with a huge void to fill.

A number of his signings in the last 12 months have underwhelmed, further building up the pressure on him. Whoever was responsible for the capturing of Djordje Petrovic deserves so much praise. There has been no drop in performance in between the sticks from Turner to Petrovic, with the latter attracting some European interest of his own.

Last week we revealed who our Team MVP is, the only way we knew how. With donuts.

In all honesty, the Revolution have been porous at the back for large parts of this season. The saving grace has been Petrovic and notching seven clean sheets in 20 appearances is quite something. One shouldn’t forget that he is only 22 years old as well!

Revolution fans have voted for Djordje Petrovic as Team MVP whilst his teammates have named Players’ Player of the Year. Having made eight saves against Houston back in September, Petrovic was named in his seventh MLS Team of the Week of the season which staggering when you consider when he joined.

Read More: Djordje Petrovic is the latest Revolution signing- is he Turner’s replacement?

Who Else Had a Good Year for the Revs?

Djordje Petrovic led the way from the back for New England, but he wasn’t the only player to perform admirably. In and amongst their injuries, fullback duo Brandon Bye and DeJuan Jones continued to drive the side forward on the flanks. They had six and five assists respectively, bettered only by captain Carles Gil.

Matt Polster always goes under the radar in a Revolution shirt, and with the sides he previously represented in MLS too. Arena has chopped and changed his midfield a lot this term and yet Polster, at the base, is the ever-present rock. Another regular was Gil, he led the team with 32 appearances alongside Tommy McNamara.

Congrats to Djordje, @2Fast2Farrell, and @bbknighton, your 2022 Team Award Winners!
Well deserved by all.

Gil was up there when it comes to goals scored too, him and Adam Buksa found the back of the net seven times. Only one man was ahead of them, and this was Gustavo Bou. The Argentine took the outright lead in the last game- goals from him and Giacomo Vrioni secured the three points against Atlanta.

In the meantime, we saw little no action from recent arrivals Christian Makoun, Ismael Tajouri-Shradi and Nacho Gil. Tajouri-Shradi suffered a season-ending injury whilst Nacho Gil, brother of Carles, joined late on in the season. Assuming they remain with the club for 2023 (stay tuned for roster news), it will be exciting to see them take the field more regularly.

Going back to Djordje Petrovic and the awards may not stop for him here. There is constant chatter around the league about the best newcomer and Petrovic has to be in the mix. Cucho Hernandez is another name in the mix who wasn’t here from the start but has definitely thrust himself into contention having scored several goals for the Columbus Crew. Will Djordje get the recognition on a league-wide scale?