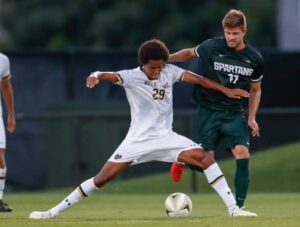 INTERVIEW – After trading down from 10th to 23rd in the first round of the 2022 MLS SuperDraft, the Colorado Rapids selected Notre Dame midfielder Mohamed Omar. Last Word on Soccer spoke to Omar just hours after his was selected.

Omar is a senior at Notre Dame. He is originally from Toronto, ON. and spent time in the Toronto FC academy. He went to high school at the Berkshire School in Massachusetts and has spent time with TFC III and the Canadian National Team at the U-20 level. The Fighting Irish won the ACC Tournament this past season and lost to Clemson in the NCAA Tournament Semifinals in penalties. With that, let’s get into the interview.

Last Word on Soccer: First of all, welcome to the club. Congrats on being a professional player.

Mohamed Omar: Thank you so much. Great to be in this moment. It’s a dream come true and I wouldn’t be here if it wasn’t for God and all the support my family and friends have given me over the course of my life. I’m just so excited to come into Colorado and really thrive in that environment. I couldn’t be more thankful.

LWOS: Have you spoken to Padraig Smith, Robin Frasier or anyone else at the club yet?

MO: It’s definitely been a hectic time. I had the pleasure of speaking to [Padraig] shortly after being drafted and just had a great phone call talking about how excited the club is for me to come in and be echoing that right back and just telling the club how grateful I am for the opportunity and how excited I am to come into pre-season and prove myself, just highlighting how grateful I am.

LWOS: You spent some time at the TFC academy and TFC III in 2018. At that time, Robin Fraser would have been an assistant with the first team. Drew Moor and Clint Irwin were there. Mark-Anthony Kaye was in the academy. Who do you have existing relationships with?

MO: It’s funny because so back in 2013-2014, when I first joined the Toronto FC Academy, Marc-Anthony was actually still there. I was playing on what we called the Junior Team and he was playing on what we call the Senior Team. Our paths didn’t cross necessarily daily there, but I just remember going up against him sometimes when we’d play the Junior Team vs Senior Team for four intra squad scrimmage or just seeing him around the training ground. He was definitely somebody who I looked up to.

Then a couple of years later, being back at TFC over the summer I was actually playing with the second team. We trained in the morning while the first team was training also. We head to the training ground in the morning and have breakfast there. I remember always seeing Coach Robin Fraser, and it was funny he would give me some banter and him and one of the other assistant coaches would always say, “oh, Mr. Notre Dame is back, Mr. Notre Dame is back.”

It was always a funny time there. I always admired those two individuals back when our paths crossed Toronto FC and just so excited to be with them heading forward.

LWOS: Next time we speak, I’ll have to ask if Robin still is referring to you as Mr. Notre Dame then. Let’s move on to this past college season. Compared to the 2020 season, did 2021 feel normal? Did it feel like you had a good run of games and got to develop and grow as a player?

MO: Absolutely. Comparing it to what we experienced back in the fall of 2020 is day and night. Everything changed, but at the same time we’re still in the middle of a pandemic, but we definitely were given more flexibility, which definitely helped our play on the field and off the field. Because back in the fall of 2020, we had to limit our exposure to one another as teammates, but also the rest of the community. We weren’t able to have those team bonding activities that we like to do when we go play mini golf as a team, we go bowling. Those things were just off the table.

But coming into this fall season, we were able to do a lot of those things again, thankfully. It really helped us on and off the field just become such a tight knit group. I think that’s why we had such a deep run in the season and we’re so successful. Winning a championship is because a lot of those relationships that we normally build, we were once again able to do that and and really spend time with each other and get to know each other better off the field.

LWOS: Let’s talk about that ACC Tournament. You beat a very good Duke team in the final. What was that experience like? How do you think you played in the tourney?

MO: That feeling was amazing. I came to Notre Dame with with the goal of winning trophies, and it was no better feeling and seeing that ACC trophy after the tournament. Just because we’ve been counted out so much as a team.

I’ve been counted out so much as a player; I’m not somebody who receives all the accolades, but I’m someone who knows his job and knows his role. And I’m someone who has no problem being the guy who just keeps his head down and works hard because I know that will bring success for the entire team. As I have done all season, I did that in [in the final] and we were able to have a shutout in that game and when to know, and it really was a dream come true, winning a trophy for the Irish.

LWOS: You carry that form in the NCAA Tournament. You get a couple of really good wins and then have dramatic success in beating Pitt in penalties, but then lose in the Semifinals in penalties to Clemson. What did you learn from those experiences and ultimately that failure?

MO: I think it really just highlights why we all love the game. There are so many highs that come with the game, but there’s so many lows as well, and you just got to have the right kind of a happy medium and do your best to stay level headed. And I think that’s something I’m going to be taking with me into the next step in my career.

You see it within the span of a week: We’re celebrating because we’ve just won on penalties in the Elite Eight. And then the following week in the Final Four, you lose in PKs. So it’s all about balancing that and really just highlights how cruel the game can be sometimes. But also why we all fell in love with the game as players and why we continue to play it because it really does bring so many emotions along with it.

LWOS: It’s interesting, that experience kind of parallels with the Rapids went through last season with the drama of finishing top of the Western Conference on Decision Day and then the loss in the playoffs. You’ll come to find your new teammates are very level headed. You’ll be in a similar headspace. On that note, I want to ask, how much MLS do you actually watch? Did you watch the Rapids at all this past season?

MO: I actually try and watch MLS as much as I can, honestly. And I’ve always been a fan of the league ever since I was a little kid. I can still remember watching games way back in my youth and I still watch them with the same amount of excitement as I did back then. I’m a believer in all the talent that we have in North America and really just growing the league for not only for ourselves, but for the rest of the world to see that there is so much talent in North America even if we might not get the credit.

I just look forward to helping push MLS as a league. I’ve been able to watch a decent amount of Rapid games. I’m definitely a super big fan of that transition that happened the last two years. And I’m just so excited to head into a wonderful place like Colorado and a place where I can grow as a player on and and as a man on and off the field.

LWOS: Robin Fraser likes versatility and fluidity in its midfield, both at the individual level and as an entire unit. Do you have a favorite position in the midfield? Do you have a best position?

MO: It might depend on who you ask, but I might say that my best position is playing as a No. 6, as a holding midfielder. During my time at Notre Dame, we played a number of different formations. We played at three in the middle, two in the middle. I’ve played as a 6, I’ve played as an 8.

During my days with Toronto FC and the Canadian National Team at the U-20 level I was, I was used as a center back. I do believe that my versatility is an area that is one of my strong suits, and I do believe that I have a lot to contribute to the team in whatever position the coach sees fit.

LWOS: This next question is a little bit of a silly one. How long has the afro been thing? Are you going to keep rocking it as pro? Tell me about your hair game.

MO: Funny enough I’ve always had the fro ever since I was a little kid. I actually had it much bigger than this, so I used to have a braid it up. I’ve had it in cornrows. I’ve had it in a ponytail even. But but the afro was always my thing. It’s funny because my mom always said, that’s just another way that you stand out. I always just kind of took it as my thing and I really enjoyed having the afro. I do think it’s a trademark of mine and that I have no plans any time soon of getting rid of.

LWOS: Last question. Individually and as a team, what are your goals for the season?

MO: My goal going into the season is to make my professional debut in a Colorado Rapids jersey. It’s been a dream come true today, hearing my name called it the SuperDraft by such an amazing club like Colorado. But it’s time to for the next chapter, and it’s time to kick on again and continue to grow and improve. For the season, I just want to work my way into the first team and continue to grow and learn from the coaches and learn from my teammates.

And then goals for the team. I think you saw just how much the team has grown in the past two years, and I want to contribute to that growth and carry that growth into the postseason once again this year and and see if we can make a deep run.