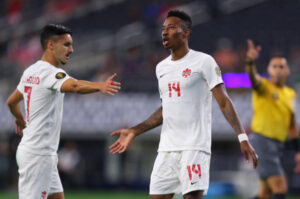 INTERVIEW – Mark-Anthony Kaye has arrived in Colorado. He’s attended his first day of training. He’s available for selection to make his Rapids debut tomorrow against Sporting KC. On Thursday afternoon, I got to speak to him about his style of play, coming to Colorado, the Canada Men’s National Team, and how the trade from LAFC went down. Here’s a transcript of that interview.

LWOS: First of all, I always like to ask this. When I talk to a new player for the first time just to make sure I’m referring to them how they like. Do you prefer Mark or Mark-Anthony?

Kaye: We can go with Mark-Anthony, but usually in person, Mark is fine. It’s quicker.

Ok, Mark casually, Mark-Anthony professionally. You’ve been here in Colorado for a few days now. What are your initial impressions of the club and your new teammates?

Kaye: Yeah, the team, great group of guys, good locker room. Everyone seems super happy and I’m glad to be a part of a team that has such positive energy. The club, they are heading in the right direction. I feel like management has an idea of movement that they brought me in on the project.

LWOS: You would have known Steven Beitashour from your time at LAFC together. There’s a few guys on the team who are involved with Black Players for Change. Tell me about any existing friendships you have with your new teammates.

Kaye: Yes, so obviously, Beita, I’m actually staying in this house right now, playing with his son as we speak, so Beta is a good friend of mine. I appreciate everything he does from the on and off the field and that. Kellyn [Acosta] is another one of the guys that I’ve been close with and Jonathan Lewis, too.

Clint [Irwin] is on the MLS Executive Board with me and spent some time in Toronto. So there’s a good group of guys that I know here, which is nice when you’re going into a new locker room. But all the guys are great and it’s only a matter of time before I know all of them very well.

LWOS: Are you just hanging out at Beitashour’s house or is he letting you couch crash until you find a more permanent place?

Kaye: Yeah, I’m actually couch crashing until I find a more permanent place, so. But I’m just chilling right now at his place.

LWOS: He’s a nice landlord in addition to being a teammate and a friend?

I thought Canada played very well in the Gold Cup. You could have easily won the games against the United States and Mexico. What do you make of your performance and how the team did as a whole?

Kaye: I think we obviously we played well as a team. I was playing a good role on the team as a center mid. We we’ve worked really hard to improve our group of players, improve the mentality, and improve the tactics. You have to give credit to the players who have been playing very well at their club level, too.

So it gives us a better competitive edge when we’re going against other Concacaf teams. And like people saw in the tournament, we did really, really well. And I’m excited that we’ve turned the page and now we’re people respect us a little bit more. I think this will help us to get into the qualifiers.

LWOS: Do you expect to qualify for the World Cup? Do you thi-

(Yes, he interrupted me. Was I offended? Absolutely not.)

LWOS: You were at Toronto FC Academy and then with TFC II around the time that Robin Fraser would have joined the club as an assistant coach. Did you cross paths or have a relationship with him at that time?

Kaye: We did a little bit, not as much as I would have liked now knowing how good of a guy he is and a coach, I felt like we didn’t speak as much. He was around the first team and I was with the second team a lot. But I’m excited to be able to work with him. And, you know, it’s funny how your past cross eventually when you don’t even plan for it. So, yeah, I’m happy that he brought me in and I look forward to working with him.

LWOS: What have been your initial impressions of Fraser been?

Kaye: I think he’s done a really good job to create a good locker room. It’s important when you look at teams who have been successful in any sport, their locker room camaraderie has been good. So I’m I’m glad to be able to come into something like that. They probably are very picky about the players they bring into the group. But they’ve done a really good job and I’m glad that I get to be a part of it.

Then from the football sense with Robin, I’m still learning his ideas, his tactics and stuff like that. But he understands the game very well and he knows his way about going about how we need to play and make it difficult for other teams to play against us and be ruthless when we have an opportunity. So like I said, I’m excited to be part of this team.

LWOS: You were on International Duty with Canada at the Gold Cup when you got traded by LAFC. Where were you? How did you find out? Who told you?

Kaye: I was on a bus heading from Dallas to Houston with my national team teammates got a text saying “are you free?” I already knew what that meant at that point. And then got a call from the GM at LAFC [John Thorrington] and the conversation was very quick and respectful.

Next thing is all the calls from people here in Colorado, excited to have me in and just letting me know what the plans are and everything like that so it moved very quickly.

But I was very fortunate that I got the call around a group of guys who I called my brothers that love and support me. It made the news very easy to digest. I’m very grateful that it happened like that.

LWOS: LAFC’s season wasn’t going the way the club or you I’m sure wanted it to. It seems like they needed to shake things up this transfer window. You mentioned that you kind of anticipated the trade. Was the writing on the wall that you needed a new environment? Were those feelings mutual?

Kaye: I think so. If I’m being completely honest, LAFC has given me a lot. But where I stand in my career and what I’ve done within this league, I believe that I needed to be compensated more. And they felt like that’s not what they wanted to do.

There’s no need to shy away from it because we all need to be real and honest. LAFC had plans to do certain things with other players. And I felt like it wasn’t necessarily fair considering everything I gave to them. At that point, if you’re not going to get what you want there, you’re going to have to move on and you have to accept the reality of the situation even before it becomes a real situation.

The writing was on the wall that I was not happy with my situation. There were only two options: Either LAFC find a solution within themselves or they move me on. And usually sometimes the easiest decision is to move the player on.

Kaye: Obviously I come into team that have a bunch of good midfielders that bring their own quality to the game to work. They work very hard work. The work rate is something I’ve seen that that is at a top level. They work for each other and they’re all good on the ball which is nice. I feel like they all have good passing range too. I feel like that’s something I could improve also because I’m a midfielder who likes to play progressive passes.

LWOS: Coming to Colorado, getting fit at altitude can be an adjustment for players. How are you feeling about that in terms of your fitness for potentially making your debut on Saturday?

Kaye: The first day of training was an eye opener for sure when it comes to altitude. But it’s a process. I don’t want to say it’s a challenge. I think it’s the process of getting your your lungs and your body adapted. But no, it’s been good. Every day has been better, which is nice. And I’ve been very diligent with my care of my body, hydration, all that stuff. The sports science team is taking care of me, too. So I should be good. But yes, it is a process. I’m getting used to it.

LWOS: What are your expectations for the season as an individual and then for the team?

Kaye: Yeah, as an individual, I’d like to, you know, see how how many involvement I can be involved when it comes to goals. I would like to be a part of at least ten to fifteen goals for the rest of the season. Whether that’s a goal or an assist, I just want it or the third pass or anything like that. I think that’s a quality I can help bring to the team and that’s something that I’m very good at and I continue to try and get better at.

And then for the team, I think we should be hunting for the Supporters’ Shield. When you do that, that puts you in a prime position for a home playoff game. And then then you take care of playoffs because you’ve had such a good run in the second half of the season. So trophies are always the goal, and that doesn’t change.