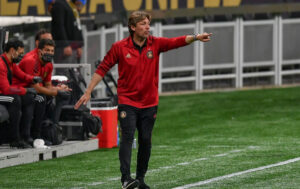 Preview — Atlanta United travel to Inter Miami on Sunday afternoon looking to get their faltering season back on track. Let’s look at how important stopping Gonzalo Higuain will be to making that happen.

After a disappointing return of just one goal in nine games last season, Gonzalo Higuain looks like a man rejuvenated. The 75-time Argentina international has two goals and an assist in two games so far in 2021. After missing the 0-0 draw with Nashville last week for family reasons, Higuain is back in training and should return here.

Given his talent and pedigree, keeping Higuain under wraps will be key to Atlanta United’s chances of leaving Florida with a much-needed positive result. But that task is easier said than done.

What Higuain lacks in pace, he more than makes up for with sheer intelligence. Instead of racing in behind opposition lines, the 33-year-old is an expert at finding space between defenders. Whether it be splitting center-backs who would rather pass him on or sitting inside in the half-space to pull center-backs and full-backs out of position, Higuain is a masterful interpreter of the pitch.

Higuain is at his best when drifting into the spaces between defenders, where full-backs don’t want to come in too tight, CBs don’t want to drift wide, or central players will try to pass him on

Whoever starts at CB for #ATLUTD needs to communicate & likely get help from Sosa pic.twitter.com/rtETXKn26i

Gabriel Heinze’s team selection will tell us a lot about how he intends to deal with Higuain on Sunday. Will he continue with the partnership of Miles Robinson and Anton Walkes, or will DP center-back Alan Franco come into the side? Could he even play all three, or drop Santiago Sosa into a back-three? Even more so if he plays in midfield, the latter will be extremely important to the Five Stripes’ chances.

It should go without saying that if Higuain wants to get between defenders, the likes of Robinson and Walkes will have to restrict space. They’ll also need to stay in close contact with full-backs George Bello and Brooks Lennon to keep a compact defensive unit.

But even if that happens, Higuain isn’t without options. If the former Real Madrid and Juventus man can’t get between you, he’ll simply drop off into the space front of you.

Sosa will become extra important if Higuain can’t find space between defenders. He’ll then drop to draw CBs out of position. If Sosa can pick up that space, #ATLUTD can keep a nice defensive shape

Pizarro/Morgan etc are great players but without Higuain, they have no focal point pic.twitter.com/97XJaT8abU

Whether in the air or on the ground, Higuain only needs a second to score from these positions. With that in mind, it’s vital that Sosa is aware of the spaces behind him, remaining mindful enough to drop in front of Higuain to cut out passing lanes when Miami are building their attacks.

If Sosa — credited by teammate Emerson Hyndman for bringing “balance” to Atlanta’s backline — switches off even for a second, the likes of Rodolfo Pizarro, Lewis Morgan and older brother, Federico, are more than capable of picking Higuain out in dangerous areas, while it could also lead to center-backs coming out of position to close him down, in turn leaving space behind them for midfield runners.

Of course, Heinze has to balance this defensive caution with the fact his side has scored more than once on just one occasion across all competitions this season. Even so, if Atlanta can keep the back door shut, the likes of Josef Martinez, Jurgen Damm and Marcelino Moreno should have enough on the tank to snatch a result.

It all comes down to whether or not Atlanta’s young defense can win a game of cat and mouse against one of Europe’s most potent strikers of the last decade.