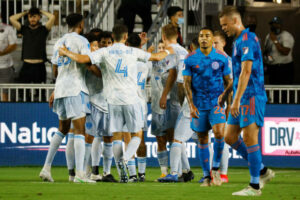 Paced by a prolific Paul Arriola and an Ola Kamara brace, DC United dragged their dormant attack out of the early season doldrums and routed Inter Miami 3-0 Saturday night at DRV PNK Stadium in Fort Lauderdale.

For Inter Miami, the result was another frustrating night of soccer despite playing a DC United side starved for offense and battling injuries ahead of the international break.

“Obviously, we’re disappointed. A home game where we’ve not produced any kind of performance for our fans and it was a special occasion as we finally got to see the full building and insight into what kind of support and fan base and football club has and we didn’t give them anything,” Inter Miami Head Coach, Phil Neville, said following the game.

In his attempt to reward the fans and environment, Neville initially switched formations to a 4-4-2, presumably to see if he could give his side a bit more bite in attack after a very dire 90 minutes in a 1-0 defeat at the Chicago Fire last weekend. While Inter Miami played with more energy in the opening half, the results– and the soccer- weren’t much better for it.

Indeed, it was DC United’s Ola Kamara who opened the scoring in minute 15 following a dire giveaway from Inter Miami defender Nicolás Figal.

It would get worse seven minutes later, when DC United captain and US international Paul Arriola would make a darting run, beating Figal to a spot and collecting an Adrien Perez pass, taking one touch and finishing beautifully from a tough angle past John McCarthy.

Adding insult to injury, the second DC United goal came as the Inter Miami defense became discombobulated off a throw-in, hardly a sign the club had responded to the “bring the energy” message manager Phil Neville had delivered all week.

The lazy defensive positional breakdown that led to the goal was the latest example of the moments that are costing Inter Miami, especially at home.

“You can point fingers at individual errors,” Neville said. “It is those individual errors and lack of concentration that are really hurting us. But worse, it means we’re not difficult to play against. We give teams playing us at home that there’s always the chance to score against us. That’s disappointing.”

Playing in front of a sell-out 15,945 crowd– the first full stadium in club history– conceding two early goals to a DC United side starved for offense coming into the game was a nightmare from which Inter Miami would never wake.

“The two goals in the opening 30 minutes made us nervous and we were put behind and out of our game,” Neville said following the loss. “We focused all week on keeping it simple and eliminating mistakes and it was disappointing in that respect because we failed to do that tonight, and they punished us for it.”

A formation switch after the half-hour mark nearly wrested the hosts from their slumber, with Inter Miami shifting from their 4-4-2 and returning to their customary 4-2-3-1, slotting Carranza up top as the lone forward and moving star Gonzalo Higuaín back to play as the number ten. A nice bit of play from Lewis Morgan found Carranza running in off Gonzalo Higuaín’s movement and open in the six, but the young Argentine’s free header glanced just wide of a helpless Hamid’s net.

The decision to play Higuaín as the ten, not the nine, was puzzling, but the Argentine star seemed to have the energy his manager wanted, frequently bolting back to midfield to find the game- and the ball. In fact, Higuaín too often found himself isolated on the ball almost at midfield, screaming and gesticulating with his arms for someone- anyone- to show for the ball and get involved. It’s been that kind of few weeks for Inter Miami, who have struggled to find much creativity, or even simple conduits, in midfield in the absence of the injured Rodolfo Pizarro and the too often behind the pace Blaise Matuidi.

Inter Miami made one change to open the second half, bringing on Brek Shea for Victor Ulloa. While the change didn’t bring immediate dividends, the team did seem to play with more energy with Shea on the pitch. Lewis Morgan earned an early second half corner, only to see Christian Makoun miss entirely a free header in the box off the set piece. Moments later, a long blast from Higuaín missed just high and wide of Hamid’s net. It was a statement of intent from the Herons, and one their manager- and their disgruntled fans, who booed in spots as the team left the pitch for halftime- would have liked to see earlier in the night.

Perhaps sensing an opportunity, Phil Neville made three additional changes at the hour mark, bringing Federico Higuaín, Jay Chapman and Kelvin Leerdam all into the match. It nearly resulted in a breakthrough in the 65th minute, as off a corner, Figal wrapped his foot around a ball in a scramble only to see the shot blocked well by Hamid hard and low at his right post. That was Inter Miami’s first shot of the evening, but it gave the visitors some hope, though that too would be short lived..

In the 71st minute, DC United put proceedings to bed.

Arriola was played into acres of space down the left on his preferred foot and, when Figal mystifyingly declined to close the space, the US international played a dime of a ball to the head of Ola Kamara, who buried the easy header past a helpless McCarthy. The goal was a testament to the effectiveness of DC United’s press on the evening, and also a tribute to the quality of Arriola, who is especially dangerous when given space.

Even efforts at a consolation goal for the hosts were denied, as a Higuaín breakaway late was denied cruelly by Hamid to preserve the visitors’ shutout.

In the end, it was another poor effort from Phil Neville’s men, who have managed to secure only one point in four matches on their home pitch in Fort Lauderdale. The Herons will now do some soul-searching as MLS enters an extended international break to accommodate the CONCACAF Nations League next month. When Inter Miami return to play, on June 19, it will be this DC United side waiting for them, in a return leg at Audi Field. How the Herons respond to that game, and the Florida Man Derby with Orlando City that follows it, will say a great deal about the club’s trajectory this season under Phil Neville.

Neville told the team following the game he was frustrated, but also emphasized that he is a big believer that ultimately, he is the one who must be held accountable. He declined to agree that the three-week international break would be a time for soul-searching, but he did hope his players would take a few days off, clear their heads and come back determined to be difficult to play against, beginning with a rematch with DC United on June 19.

“There needs to be a period for clearing the mind for three or four days. After the rest, we can focus on getting back to work and getting to where we are hard to beat. We want the team we are playing against to know it is not easy to create chances against us,” Neville said. He declined, however, to suggest there was any added urgency as the team leaves for the break.

“We’re only nine games into the season. It’s not time to start pointing fingers. We just need to take responsibility, myself more than anyone, and come back from this international break more dogged and more determined to eradicate the mistakes that are costing us games,” Neville said.

The post Inter Miami Routed at Home by DC United, Enter International Break with Soul-Searching to Do appeared first on Last Word On Soccer.