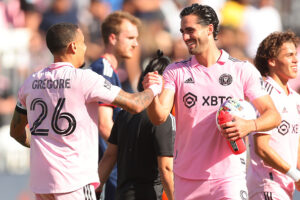 Fort Lauderdale – Things go from bad to worse in the New England camp after conceding yet another late goal. The Revs continue to show lapses of concentration as games draw to a close, that shouldn’t take anything away from Inter Miami though. Phil Neville’s side picked up their first win of 2022 which is a huge monkey off of their back. Meanwhile, the issues show no sign of stopping the Revolution.

Inter Miami topple the Revolution in a five-goal thriller

How the nightmare unfolded at DRV PNK Stadium

Without wanting to be blasé, the Revolution must have been thinking that this was the perfect fixture to get back on track. Inter Miami came into this clash with just one point to their name, this coming on the opening weekend as they tied the Fire 0-0. There have been countless issues on and off of the field in the Miami camp. This didn’t come into play though as the weaknesses of the New England backline came to the fore once again.

From what I can tell, Bruce Arena has only lost four consecutive MLS games once. It was his first four games as head coach of D.C. United back in 1996. #NERevs

It was the Revolution that began in the drivers’ seat and once the first goal went in, it seemed that only one result was in store. Justin Rennicks was on hand to convert a DeJuan Jones cross, the fullback playing on the opposite side to usual in Brandon Bye’s absence. The forward was delighted to get off the mark: “getting the goal was great. You know, it’s been a long time coming. It’s been four years now and I’ve just been waiting to get that goal, so I finally got it.”

Rennicks was also fouled for the penalty that was eventually converted by Carles Gil. It was certainly a contentious call from the referee and in all honesty, I’m still not sure the decision was correct. This goal from twelve yards out made the scoreline 2-2 after a first-half brace from Leonardo Campana. It was then the Ecuadorian who stole the game for Inter Miami at the death.

Leonardo Campana is the man of the moment for Inter Miami

Focusing on Campana and he certainly made the difference in this one. He came into the line-up in place of Gonzalo Higuain for Inter Miami. The Argentine forward did not even make the eighteen. He looked lively in the early stages of the game and reaped the rewards with a match-winning hat-trick. He was a shining light but the Revolution underperformed once again, without a doubt.

Campana’s opposing number Rennicks stressed the point that this defeat and poor run aren’t indicative of what the whole of 2022 will hold.

“You know, everything was just unlucky. It was a couple of mistakes here and there, but we’re a great team and it’s just been a slow start.”

A fascinating stat (as per Seth Macomber of the Bent Musket) is that this is the first 4 game losing streak for Bruce Arena since 1996 when he was at the helm of DC United.

Campana completed the hat-trick, the first in the history of Inter Miami, with just minutes to go as he was first to react to a melee inside the six-yard box.

Brad Knighton was unable to keep hold of the ball, much to the delight of the Ecuadorian on loan from Wolves. At this decisive moment, Arena said the following:

“The third goal was another gift we’ve given away… I thought our guys did a good job there with the exception of that play at the end of the game.”

Whereas he has been down in the dumps after previous defeats, the man in charge seemed somewhat hopeful.

Where do we go from here?

Bruce Arena on the game

It could be deemed as an excuse, especially when facing an inferior side such as Inter Miami, but injuries continue to plague the Revs. That being said, Coach Arena wasn’t willing to lay the blame on this.

The third and final man to speak to the press post-game was midfielder Sebastian Lletget.

“I guess the same thing that has always been happening. It seems like a habit of ours to just give up goals beyond the 80th minute. It’s nobody in particular, it’s the collective unit, and it’s obviously frustrating and I’m clearly disappointed. I just know that we’re better than this.”

On his mentioning of the timing of the goal and this is a recurring issue: RSL scored twice late on, the Red Bulls won it at the death and now so have Inter Miami.

The positives of the New England Revolution

It wasn’t all negativity from the USMNT man though, optimism clearly being the flavour of the day:

“We go back home, we go back to the drawing board, and we really see what has gone wrong here, because we have too much ability, too much talent on this team for this to be happening. I really feel that, and that’s all I got.”

Inter Miami got the job done on home soil and disposed of last season’s Shield winners. The Revolution looks nothing like that record-breaking side but that is to be expected. Arena and co have to get back on track and soon, the likes of Adam Buksa and Matt Turner coming back into the fold should help with this. This really was another extremely low ebb in this horrid stretch of results.

The post Inter Miami compound the Revolution’s misery with their first win of the season appeared first on Last Word On Soccer.