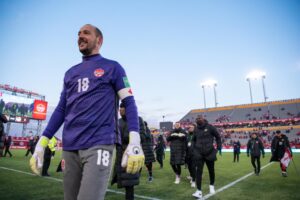 EDITORIAL – A huge CanMNT win over the USMNT was a moment to watch. It was also one of just many highlights Canadian soccer fans were privileged to watch with the men’s team within the last three years.

Huge CanMNT win: The future is bright for Canadian Soccer

Full Game Summary:#CanMNT’s defence was the story of the game against the #USMNT.#MilanBorjan made a huge save in the first half.

The CanMNT’s offence was clinical

The touch-passes with Cyle Larin and Jonathan David resulted in the goal in the seventh minute. It was a spectacular play, which was seen after several moments of the game. Canada would sit back and absorb the pressure. However, the CanMNT would counter and give themselves many good scoring chances.

They would continue to do this throughout the game. Jonathan David got past several defenders near the beginning of the second half. He gave it to Tajon Buchanan, who was unable to get a pass or shot on goal. In the Jonathan David shot in the 70-minute, Cyle Larin shot the rebound, but USMNT goalkeeper Matt Turner made the save.

Defence and goalkeeping were spectacular for the CanMNT

The CanMNT’s defence was spectacular today. It was the biggest reason why Canada came up with the three points. A clear example of this was when Cyle Larin scored the first goal of the game. After that goal, Canada took care of the USMNT’s dangerous offence. As a result, the USMNT only had one shot on goal in the first half.

The U.S. had some chances to score in the second half. However, a combination of them not taking their chances, and Canada playing well defensively played a big role in the game. This allowed Sam Adekugbe to get the goal-clincher and dramatically improve their chances of qualifying for the World Cup in 2022.

The CanMNT goalkeeper Milan Borjan also made a fantastic save to preserve Canada’s lead late in the first half. He made two big saves against Honduras and also made one late save against Mexico to preserve the win. He might become the best goalkeeper in CanMNT history. This is especially true if the CanMNT makes it to the FIFA World Cup.

The soccer culture is changing with the CanMNT

It is clear that Canadian soccer’s popularity is booming right now. This is because of the CanWNT winning gold and now the success of the CanMNT. However, the Canadian men’s soccer team was not shown on television nationally until recently. This is what Sid Seixeiro said in 2019 on wanting the game in the U.S. to be televised nationally in Canada according to Sportsnet:

“I am praying that this game finds its way.” Sid Seixeiro said. “At least air it.”

This was also the case for the 2021 Concacaf Gold Cup and the first two rounds of 2022 World Cup qualifying. These games, including the 2-0 win over Costa Rica in the Gold Cup were not televised nationally.

Huge credit to Sportsnet, who will air 13 of #CanMNT 14 games in the Octagonal Olympic qualifiers including yesterday’s game against Honduras. Also, credit to OneSoccer for growing the game in Canada.

The other game will be televised on September 5 on TSN against the #USMNT. https://t.co/M3UzNl8Bmd

However, that all changed when it was announced that the OneSoccer streaming rights were bought by both Sportsnet and TSN. This is with Sportsnet nationally showing the game on TV for 13 of the 14 games. The only game not shown by Sportsnet was televised by TSN of the 1-1 draw in Nashville between Canada and the U.S. Now a whole nation can get behind the national team in a country with several different sports played like ice hockey, box lacrosse, Canadian football, curling, and basketball.

The CanWNT is the most popular national team in Canada as they achieved success first. However, the CanMNT is not far behind and has gotten the attention of the nation.

This is what CanMNT head coach John Herdman said about the game according to Steve Milton, Spectator Columnist of The Hamilton Spectator:

“I’ve seen nothing like it,” Herdman said afterward. “It’s what we’ve dreamed of. It’s the first time I’ve really felt like I’m living in a soccer country. It was like Liverpool arriving for a Champions League game, no exaggeration. The flares going off, the people in the mosh pit, the bus could hardly get through it.”

A city that did not have a team to support until a few years ago has experienced many accomplishments since getting a CPL team. It is also a great way to increase interest in soccer before Forge FC hosts Cruz Azul on February 16 in Hamilton.

Huge CanMNT win as they made history

The #CanMNT took four points in two games from both the #USMNT and #HechoDeLosMexicanos in #CWCQ2022! An incredible accomplishment!

The huge CanMNT win now puts them at the top of the table. They are four points ahead of Mexico and the U.S., and five points clear of Panama. Kristian Jack and Gareth Wheeler said that the magic number to make the World Cup is 24 points. Canada has 22 points with four games still left to play. Panama, the U.S., and Mexico are going to take points from each other. This is because Panama has to face both the U.S. and Mexico on the road while the U.S. will play at Estadio Azteca against Mexico in March.

The CanMNT close their January-February window against El Salvador on February 2 at 9:00 p.m. ET. The game will be shown nationally on Sportsnet and also shown on OneSoccer and Telus.

The post Huge CanMNT win over the USMNT: What it means for Canada Soccer? appeared first on Last Word On Soccer.