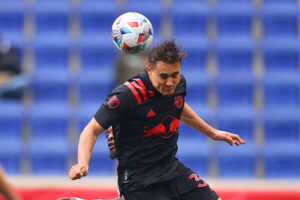 You may already know by now, but New York Red Bulls defender Aaron Long’s injury is classified as a ruptured achilles tendon. He was injured in the 1-0 loss against the Philadelphia Union last Saturday night. After undergoing successful surgery, Long will miss the rest of the regular season.

It is a brutal blow for a club that maintains playoff aspirations even with a new head coach and multiple new signings. The 28-year-old has been a mainstay at heart of the club’s defense since being promoted from Red Bulls II back in 2017. He quickly emerged as the one of the league’s best centerbacks and New York has been able to ward off any transfer offers for Long’s services abroad.

Here is a look at the play Aaron Long was injured on. The way he reacted when he tried to push off his right foot, and the aftermath, has the tell-tale signs of an Achilles injury. Really hoping it’s not. pic.twitter.com/J5iNw5CKDb

But now the Oak Hills, California native faces a lengthy recovery that could see him out until 2022. It’s the type of injury that can take longer than normal for athletes to get back to their best. The Red Bulls now have go the rest of the way without their talisman, so what’s the plan?

What the Red Bulls will miss in Long’s absence

New York Red Bulls and USMNT center back Aaron Long will miss a significant period of time after tearing his Achilles, sources told The Athletic on Monday.

The 28-year-old has made 21 appearances for the national team, including three starts in 2021.https://t.co/vjLaxD5F3D

When discussing Aaron Long, you’re talking about a top-five defender in all of Major League Soccer. With the aforementioned rookie season in 2017, Long has amassed over 100 appearances for the club.

His skillset sets him apart from most. He is able to smartly cover ground and press effectively, he’s been tailor-made to the Red Bulls’ system. In the air he wins aerial duels and has also netted eight times for the club, making him a threat on set-pieces. This is also not to mention his fine capabilities as a passer, comfortable playing the ball with either foot. It’s what’s had him averaging nearly five long balls per game according to SofaScore.

Long’s experience has made him a rock at the back, averaging a shade over three-clearances-per-game. He has been the poster child for the club’s developmental strategy going from second-team to first-team to one of the best in the league. Current Red Bulls head coach Gerhard Struber may have to tweak his playing system to not expose the defense ahead of the weekend’s trip to New England.

Sporting executive Kevin Thelwell made it a point to sign many players this season. The increase in depth has a) given Struber multiple options in attack, midfield and defense and b) can help weather any storms over injury. Now the Red Bulls will showcase a new-look with center back pairings.

Sean Nealis has been Long’s partner throughout the early campaign and has made the most of his minutes. Amro Tarek came to the club as a centerback and that position seems to be his most natural fit. However, after also leaving the Union game with a knock, his status at both center back and fullback is up in the air for now.

Andres Reyes came to the club over the transfer window and hasn’t started for the club yet. The Colombian youth international can be brought up to start this weekend but may not be fully fit. Mandela Egbo arrived last year and has captained Red Bulls II as a center back, so he’s fit. Converting the Englishman to the senior side is the easiest maneuver to make, so that’s something to watch going forward.

What about a trade? Long’s absence for an extended period of time may necessitate a move to bring in someone. But trades in this league are complex given the roster rules and configurations. That doesn’t mean the Red Bulls aren’t picking up the phone looking to possibly sniff around and make a deal.

The first season for Struber and company has its first major roadblock. Glass half-empty is losing one of the best players in the league for the rest of the season and maybe even early parts of next season. Glass half-full is continuing to establish the plug-and-play youth blueprint. All is not lost on the season, but the wiggle room has become much smaller.

The post How will the New York Red Bulls cope with Aaron Long’s injury? appeared first on Last Word On Soccer.