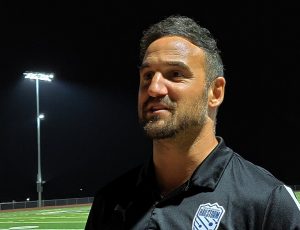 SEVERANCE, Colo. – There’s a lot of ways you could sum up this year for Northern Colorado Hailstorm FC. New. Wandering. Inconsistent. Climactic. I’d personally go with resilient. They’re an expansion team in USL League One. They’ve had three different home stadiums, none of which will be their permanent home. The weren’t settled in terms of the stadium and training facility until August, with just 12 of 30 games remaining. Down a man against FC Tucson on Saturday night, they needed to find a way to win to give themselves hope for the playoffs.

Northern Colorado against started well at home. Wolfgang Prentice scored in the 11th minute. The left midfielder picked out the opposite bottom corner, banking the ball off the post to score his first of the year. Tucscon goalkeeper Sean Murray was excellent after conceding. Everything appeared to be under control at the end of the first half. Then Johan Peñaranda came off his line on a long ball to the edge of the box. He tried to clear the ball with his feet, but clattered into Fernando Garcia for a straight red. João Delgado put the free kick off the post with Luca Mastrantonio putting in the rebound. It was 1-1 at halftime.

The second half was open with both teams getting chances, but the final product was lacking. Substitute goalkeeper Thomas Olsen stood on his head at times, with Garcia missing a sitter early in the half. Stefan Lukic had two good looks at goal, including a looping header in the 75th minute. Murray made the save to concede a corner, though the shot did not appear to be on goal in the first place. This game would come down to a brilliant individual moment. On that corner, the ball was cleared to the top of the box. Former DU Pioneer Destan Norman ran onto the ball and shot low and hard to the bottom corner. Hailstorm held on to win the game 2-1.

The core of this team is Irvin Parra up top, Arthur Rogers creating chances, and Rog Cornwall leading the backline. All three of those players played well in this game. But the match was defined by role players. Olsen came off the bench cold and immediately conceded. He then had a great second half. Prentice has been good on loan. Just like Trevor Amann’s previous hattrick trick, this was a culminating performance with a great goal. The same thing could be said for Norman. It would be fitting for that goal to send this team to the playoffs. It’s fitting it came from a kid from Fort Collins.

The team in form:

Hailstorm finish the regular season on a 5-1-1 run. They picked up 40% of their points in the final quarter of the season.

“The game summed up our season. Started off right. Dealt a blow. We had to deal with a lot this year, with stadiums and training fields,” manager Eamon Zayed told Last Word postgame. “If you look at the last six games, we’re the #1 team on form. If you look at the last 11 games, we’re third in the table on form. If we get into the playoffs, we will be the #1 form team. We deserve to be there.”

They’ve dealt with that adversity well at times. They’ve rounded into form since moving in Severance. It shows had they been settled, they might be further up the table. With the Future Legends Complex on the way, this year is proof of concept for the technical staff.

Zayed switched his message between pregame and halftime.

“Before the game, I didn’t say much. I said ‘remember first game of the season, we played Richmond away. Everybody fought and gave it their all.’ The second thing I said was ‘discipline. Do not get knocked out of the playoff race by getting a red card or doing something stupid.’ At halftime, my message was simple. I said ‘I was wrong. Our first game of the season was against the Switchbacks, when we played them away in Open Cup. We went down to 10 men and we won that game 1-0. I said we can do it. I need you to double the effort in every position.’”

All other teams in League One finish the season next Saturday, October 15th. If Charlotte Independence defeat North Carolina and Tormenta wins or draws against Chattanooga, Northern Colorado Hailstorm will miss the playoffs. Any other combination of results, and they will quality.

The post How Northern Colorado Hailstorm embodied their season in home finale appeared first on Last Word On Soccer.