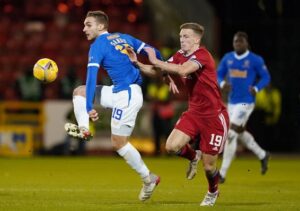 On January 6th 2022, Rangers FC announced the loan signing of James Sands from New York City FC. The Rye, New York native moved to Scotland at the age of just 21. A bold choice on many fronts, not least because of the notoriously physical league Sands has moved to. Big challenges lay ahead.

How James Sands Performed in his Rangers Debut

This is a guest article written by Andrew Barnard.

Americans in the Scottish Premier League isn’t a something new. Until this year, it seems Rangers in particular is the place to go for Yanks seeking a fresh challenge who land in Scotland. Even the link between NYCFC and Rangers isn’t new. Former NYCFC Sporting Director Claudio Reyna, spent two years from 1999-2001 in Glasgow, and more recently, 2021 teammate of Sands in New York, Gedion Zelalem, spent a year on loan in Glasgow in the 2015/16 season from Arsenal.

The broadcast graphics had Sands starting as part of a back four, but with the words of Van Bronckhorst, you sensed this might not be the case. From the kick-off, Sands looks to be positioned slightly further forward, sitting as part of a flexible holding midfield duo just in front of the defense. Once the game got moving, it took just moments for Sands to make a small mark at least. A good confident header after towering over his opposition counterpart in the 4th minute, showed strong intent to get stuck in and be a part of this game.

In the 20th minute, Sands demanded the ball from one of his center backs to try and get a move started out from the defensive third. His pass went into striker Morelos, and then just 3 passes later, Hagi puts Rangers one goal to the good against Aberdeen. No doubt his team scoring first in the game would have given him a boost of confidence that he belongs here, and he showed determination to be given the ball in that build up, that I’m sure encouraged his teammates too.

This pressure continued with two incisive balls within 30 seconds from the edge of the box into the 16-yard box by Sands. Both successful passes but they didn’t lead to anything. He’s continuing to show the Rangers faithful why he’s gone straight into this team for both his defending and attacking strengths.

On 37 minutes, Sands cleared the ball confidently, going into a tackle wholeheartedly despite the incoming challenge from ex ‘Ger, Ross McCrorie. Sands won the foul and got what I would call a “welcome to Scottish football” from McCrorie in a crunching tackle. The match referee didn’t give a yellow here despite giving yellows for softer challenges earlier.

In a team with such bold talents as Hagi and Morelos, Sands had not ghosted his way through the first half, he was involved and no mistakes were made. Sadly in the second half, Sands and Rangers took the brunt of the attack from Aberdeen, which wasn’t helped when they went down to 10 men thanks to two avoidable yellow cards for Ryan Kent. Sands did get himself into some good offensive positions and one ball flashed just a yard or so in front of him inside the box that on another night, he may have been on the end of.

Rangers made all 3 subs available to them, but Sands was not one of them. Although a common sight to see a debutant being substituted, this wasn’t the case here. In this second half, Van Bronckhorst found other adjustments more necessary with the change in pressure by Aberdeen.

His final touches in the game were during a breakaway to relieve pressure on the Rangers defensive lines in the 93rd minute. Rangers found themselves down to 10 due to an injury, but Sands took the ball high up the pitch and showed some superb hold-up play and neat footwork despite having three defenders challenging him.

In summary of the game, I can’t find evidence of two Americans in opposing Starting XI’s of an SPL game before. By my research, only Rangers have ever played an American in a competitive first-team game before this season, so tonight we saw a first with Christian Ramirez starting for Aberdeen alongside Sands.

The New York native did himself proud tonight. By no means a dazzling display, but he didn’t look out of place either. Some harsher critics will say he may have drifted in and out of the game, but you could say that for most Rangers players tonight. Overall I give his debut match rating at 7/10.

The post How James Sands Performed in his Rangers Debut appeared first on Last Word On Soccer.