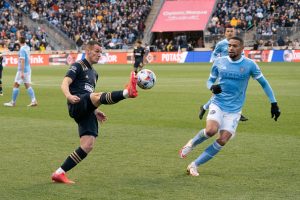 ANALYSIS – Philadelphia Union finished top of the Eastern Conference for the second time in three seasons, thanks to a 4-0 victory over Toronto FC on Sunday. Daniel Gazdag’s hat trick and Julian Carranza sent the Union through to the Playoffs Conference semi-finals.

A 3-1 victory in Miami wasn’t enough for CF Montreal, as the Canadians aimed to snatch the top spot on the final day. Seven straight wins on the road and the most away points – 35 – in MLS history wasn’t enough for Wilfried Nancy’s team who trailed Philadelphia by two points.

Montreal, both New York clubs, FC Cincinnati, Inter Miami, and Orlando City will need to settle for the first round, with Philly firmly in their sights as the team to beat.

Union’s Eastern Conference Success: Where Does It Rank?

Looking Back at the Best to Take on the West

D.C. United finished top of the pile for three straight seasons between 1997 and 1999, albeit there were only five or six teams playing in the East back then. Black-and-Red also finished top in 2006 and 2007, again with only six or seven teams.

However, unlike in the 90s, they were unable to claim an MLS Cup triumph after previously doing so in 1997 and 1999 where they also won the Supporters’ Shield on both occasions. It’s remarkable to see how far they’ve fallen since their last Eastern Conference win in 2014.

Columbus Crew also finished top back-to-back, in 2008 and 2009, claiming an MLS Cup in ’08 after finishing top of the East for the second time in their history. The Crew lost in the Conference semi-finals in 2004 and would do so again in 2009.

In 2010, Kansas City Wizards became Sporting Kansas City. And it appeared as though the new name brought some luck, finishing top of the table in 2011 and 2012. However, they would lose the Conference final and semi-final in consecutive seasons.

From 2013 to 2016, the New York Red Bulls finished top of the East in three of the four seasons. The aforementioned D.C. United spoiled the Red Bulls four-in-a-row with their triumph in 2014. However, the Red Bulls lost in the Conference semis twice, and in 2015’s Conference final to Columbus Crew.

Righting the Wrongs of 2020

There’s just one trophy that has so far escaped the Union’s grasp. The last time they finished top of the East, in the COVID-struck season, they lost in the first round.

The Revs lost the final to Columbus Crew, the eventual 2020 MLS Cup winners. So a saving grace from the 2022 season is the fact that Philly is through to the last four. However, in 2020, Philadelphia won the Supporters’ Shield while LAFC won this year’s Supporters’ Shield trophy.

Of the 26 previous MLS seasons, a Western Conference side has won the MLS Cup on 15 occasions. The last of which was the Seattle Sounders in 2019. The East, by contrast, has seen 11 different winners with DC United claiming four, Columbus Crew winning two, and five other sides winning the MLS Cup once.

So Philly’s odds certainly aren’t in their favour. But the stats regarding their Eastern Conference success should give them a chance of claiming that first MLS Cup after the Supporters’ Shield previously escaped them.

The Union’s goal difference of +46 is the highest of any previous Eastern Conference winners, the second-best goal differential in MLS history. This comes down to just 26 goals conceded in 34 matches.

Offensively, there are a couple of other cracking statistics that stand out. Both the largest away and home victories of the 2022 MLS season saw Philly beat Eastern rivals DC United. A 7-0 victory in Chester on July 8 was succeeded with a 6-0 win in Washington back in August.

Only two Eastern Conference teams have scored more goals in a regular MLS season. D.C. United scored 74 goals in 32 games back in 1998. Remarkably, LA Galaxy in the West bettered that season’s total having notched a whopping 85 times.

The Galaxy scored the MLS record for home goals back in ’98, which the Union matched this season.

Toronto matched D.C.’s record total when they scored 74 goals in 34 matches en route to an MLS Cup triumph in 2017. LAFC shares the Galaxy’s record with 85 goals, having successfully done so in 2019 but LAFC lost out to the Seattle Sounders FC in the MLS Western Conference Finals.

East Secured, Onto the MLS Cup

We do not lose at home.

Jim Curtin’s side appears to have put the loss of the Supporters’ Shield win firmly behind them. That’s certainly a bonus in having a fully-fit squad to choose from, given Alejandro Bedoya’s cameo on Sunday.

It’s imperative that the Union keep everybody fit and firing if they’re to salvage their season after all. Topping the Eastern Conference is great, but it would essentially mean nothing if they miss out on the one trophy that’s escaped them so far having already lost out to LAFC. The Union has also never won the MLS Cup, despite this being Philadelphia’s fifth-straight trip to the MLS Cup Playoffs.

The post How Does the Union’s Eastern Conference Success Rank? appeared first on Last Word On Soccer.