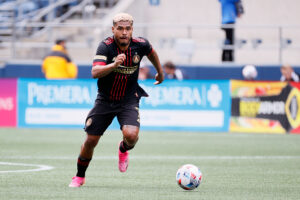 On the face of it, that sounds like a great achievement from a side that finished 12th in the Eastern Conference last season. And let’s be clear, that is, indeed, a real milestone. But it’s also important to note that during this three-game unbeaten sequence, the Five Stripes have scored just three goals and taken five points, drawing 1-1 with Inter Miami CF and Seattle Sounders FC. Atlanta also got a late 1-0 win over CF Montréal.

One criticism consistently levelled at Atlanta during the early stages of this season has been their inability to create clear-cut chances. Indeed, Atlanta is fourth-bottom throughout the whole of MLS when it comes to Expected Goals, generating just 7.1 from their six games so far. That xG has translated to just six actual goals scored, two of which were penalties.

Only Toronto FC (18), Columbus Crew (16), FC Cincinnati and Real Salt Lake (15) have had fewer shots on target than Atlanta’s 20. For all their stylish play in possession, the Five Stripes are yet to find their groove in the final third. It’s a problem that is being recognised from within the camp.

“What we need to improve is the final third so we can create even more chances,” said head coach Gabriel Heinze after Atlanta’s 1-1 draw with the Sounders last time out.

Goalkeeper and team captain Brad Guzan added: “We need to be ruthless in the final third. We need to play balls that are maybe 60-40, 70-30 balls into spaces where now you’re asking the question of the center-back going to defend outside his box, or inside his box, or a full-back that has to deal with a cross that’s been whipped in early. We need to be more ruthless. We need to have more of a cutting edge to ourselves in and around the box.”

Even Josef Martinez, who scored Atlanta’s late penalty against the Sounders to take his tally for the season to two, showed some exasperation last weekend.

This weekend, after another week on the training pitch, the Five Stripes will once again get the chance to show they can be a competitive force in this league when Nashville comes to town. Of course, Gary Smith’s men are notoriously one of the toughest nuts to crack in MLS and although Atlanta will be boosted by the return to fitness of Ezequiel Barco, this could be the biggest test of their offense yet.

Barco can frustrate, but he definitely has the ability to turn these long spells of possession into meaningful moves in the final third

Could be a game-changer over the next few weeks… #ATLUTD

But to focus solely on the negatives of Heinze’s time with Atlanta so far would be incredibly unfair. While relatively blunt in attack, they do have the fourth-best defensive record in MLS so far, conceding just five goals in six games.

The only real weakness Heinze’s side has shown so far defensively has been dealing with set-pieces and crosses into the box. When fronting up the opposition, center-backs Miles Robinson and Anton Walkes have been rock-solid. Around them, the likes of Santiago Sosa, Brooks Lennon and George Bello have performed their defensive duties to near perfection.

Much of Atlanta’s solidity also owes to their ability in possession. Holding onto the ball not only wears down the opposition but also allows you to properly position your own players to make it very difficult to be counter-attacked. A concept made famous by the great Johan Cruyff.

“If you don’t lose the ball in the build-up, it’s very difficult to be counter-attacked,” he once said.

Cruyff’s disciple, Pep Guardiola, summed it up even better back in 2017.

This is exactly why an Atlanta side with one of the best defensive records in MLS actually ranks second-from-bottom when it comes to tackles (87) and eighth-from-bottom in terms of pressures applied to the opposition (982). If you have the ball, you don’t have to tackle to get it back.

Sosa has been the key piece in all of this, dropping between the center-backs to provide a passing option not only for Robinson and Walkes but for Guzan as well. 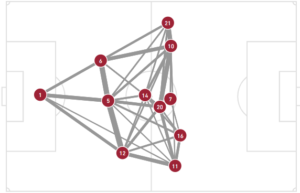 “What I really like is how we built up from the back,” Heinze said of his side’s performance against Seattle. “How the transition from the back to the front worked.”

That build-up is facilitated by Sosa.

Next steps for Atlanta United FC

The next step now is to find a way to get the Argentine midfielder further up the pitch, allowing him to dictate play and rotate the ball deep in opposition territory, rather than on the edge of his own box. But that was never going to happen overnight.

“We’ve done a lot of work on the training field of when the right time is, we’re working on our runs and things like that,” Emerson Hyndman said earlier this season. “That’ll all come. We’re still in the beginning stages of what we’re trying to do. It’s a very complex way of playing, so we’re trying to get everything up to speed quickly. We’ve done numerous things pretty well, but that’s the last stage for us, the final third. Getting that to where we all feel comfortable so we get more chances on goal.”

Right now, the Atlanta faithful should take solace in the fact that, unlike last year, conceding the first goal isn’t a death sentence for their side. The Five Stripes now have the heart to dig out late draws as they did in Seattle. Hell, if they keep a clean sheet, those late goals mean wins, a la Montreal.

It might not be the pretty, free-flowing, attacking soccer Heinze promised right at the start of his tenure, but it’s a work in progress, and progress is certainly being made.

The post How Atlanta United possession is killing the opposition appeared first on Last Word On Soccer.