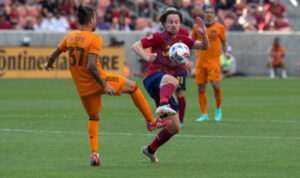 SANDY, UTAH – Real Salt Lake hosted Houston Dynamo on Saturday afternoon at Rio Tinto Stadium. The two teams found themselves in the last two playoff spots in the Western Conference. Being the road team, a Houston Dynamo draw would have been acceptable for Tab Ramos’ side.

RSL dominated the first half in possession, shots, and quality of chances. The only goal came in the the 11th minute. Albert Rusnak proved the service into the box. Center back Justin Glad got a foot on the ball before anyone else with captain Tim Parker in the area.

Damir Kreilach had the next best opportunity of the half, hitting the post with a right-footed shot. Memo Rodriguez had the only good chance for the visitors with a header a half hour in. The half ended 1-0.

The second half continued with RSL outshooting Houston and having the better of the play. On theme with the season so far, Houston was able to get a goal against the run of play, play to the score line, and grind out a result.

Seven minutes into the second half, Houston got numbers forward in transition. Tyler Pasher found Maxi Urruti in a pocket of space inside the box. The Argentinian took a touch to set up his shot then bent the ball inside the far side netting to make it 1-1.

The Dynamo set up in a mid-block to see the game out to earn a draw. Ariel Lassiter had the best chance of the final minutes with a break away, but he skied the shot just over the bar. There was a VAR check for a possible penalty on Tim Parker for an aerial challenge on Kreilach in stoppage time, but nothing was given.

Bobby Wood makes home debut: Bobby Wood came off the bench in both games this week for RSL. The draw against Houston was his home debut. We’ll see if he can bring something different to the striker position to elevate the team.

Hold It Down: Have to admit, I’m eating crow on my preseason takes on Houston. They don’t have superior talent, but they work hard, press well, and keep finding ways to get results. They did all of those things in this game.

Both teams in the mix: RSL and Houston continue to get results you might not expect, especially on the road. Sitting right on the playoff line, these two teams were predicted to finish near the bottom of the Western Conference by many. They rightfully are in the playoff hunt.