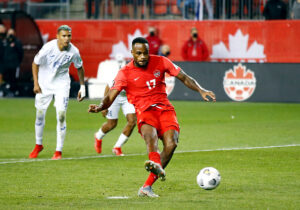 TORONTO, ON – Honduras ties on the road at BMO Field. It was not pretty as they were outplayed in the second half. However, their strong defence and positive first half resulted in a 1-1 tie against the CanMNT.

Honduras Ties at BMO Field against the CanMNT

Canadian goalkeeper Milan Borjan made a relatively easy save in the third minute. A play started by Tajon Buchanan, resulted in Stephen Eustáquio’s shot getting blocked. Cyle Larin then got the ball in the fourth minute but missed the net. In the 12-minute, Alphonso Davies made a terrific run. It ended up with Atiba Hutchinson, who was unable to control the ball.

Honduras played terrific defence all game long, including the 15-minute. Rodriguez shot in the 16-minute was off-target. Steven Vitoria had good defence in the 18-minute, clearing the ball. A few minutes later, Alistair Johnston cleared the ball and Borjan made some good saves. Buchanan and Davies switched positions in the first half. Borjan made a good save in the 29-minute. Laryea won another ball in the 32-minute. Johnston played well defensively, including in the 33-minute.

40′ The road team opens the scoring as #LaH‘s Alexander Lopez scores! However, he gets injured and gets substituted out of the game.#CANvHON | 0-1 | #CWCQ pic.twitter.com/Pza3gS5jV1

Canada looked shaky defensively as Tajon Buchanan committed a foul and a penalty. Honduras player Andy Najar drew the foul. Alexander Lopez converted the penalty, which was perfectly placed. However, he got injured on the play and had to leave the game.

Canada had some chances to equalize before the first half ended. Jonathan David’s shot was stopped. Larin’s header just missed in the 45-minute.

Canada attacked a lot in the second half. Junior Hoilett’s shot was off-target in the 50-minute. Honduras played excellent defence in the 51-minute, 53-minute, and 54-minute. Richie Laryea passed to Jonathan David, but he could not convert.

However, Canada’s relentless pressure was rewarded. Borjan started the play, and Laryea and Alphonso Davies played a big role in creating the chance. This chance ended up in Junior Hoilett’s feet, who was tackled in the box by Maynor Figueroa.

Alistair Johnston played well in the game as he made a terrific tackle in the 68-minute. Eustaquio’s cross did not get to anybody. Maynor Figueroa in the 74-minute made a good defensive play to prevent a pass to Atiba Hutchinson. Moya’s header was saved by Borjan, who hit the post and the game remained tied.

Honduras got a result on the road as they start their World Cup qualifying campaign. They will next travel to El Salvador at 7:00 p.m. ET on Sunday. They will then host the U.S. next Wednesday at 10:05 p.m. ET.

The CanMNT will also travel on the road to Nashville, Tennessee on Sunday to face the USMNT. The game will take place on Sunday at 8:00 p.m. ET. They will then host El Salvador at BMO Field on Wednesday at 7:30 p.m. ET.

Three Thoughts and Takeaways – Honduras Ties on the Road

My oh my, Milan Borjan!#CanMNT

Canadian goalkeeper Borjan was the player of the game. Canada needed Borjan to play at his best today against Honduras. His terrific save in the 79-minute prevented Canada from getting a disastrous result at home.

Honduras played good defence. Yes, the Canadian men’s soccer team should have converted on their chances. However, five of Canada’s 13 shots were blocked by the Hondurans. An example was Jonathan David’s shot getting blocked in the 83-minute.

The post Honduras Ties on the Road at BMO Field against the CanMNT appeared first on Last Word On Soccer.