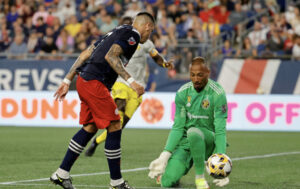 Foxborough, Mass. — The New England Revolution had so many chances but Columbus Crew goalkeeper Eloy Room was near enough unbeatable. A point against the defending MLS Cup champions isn’t the end of the world given the advantage New England boast in the Shield standings.

Andre Blake, Matt Turner and Bill Hamid are just some of the names at the fore of the best goalkeeper in MLS debate, and rightly so, but Columbus’ number one deserves a mention. Room has been consistently excellent in the sticks for the Crew and he proved the difference as his team left Foxborough with a hard-earned point.

MVP candidate Carles Gil was the first to call Room into action and the Dutch-born Curacao international was level to it. A couple of times it was even his own defenders that kept Room on his toe but he continued to defend his goal as if his life depended on it. Straying away from Columbus’ goalkeeper though and the Revolution looked good going forward. Tajon Buchanan did what he does best for large parts of the first half, he demanded the ball and then drove at defenders, striking fear into their hearts.

The two sides couldn’t be separated at the break and whilst Room had had a good first half, his true heroics were still to come. The Crew were the first to strike, Marlon Hairston swung in a dangerous cross for Gyasi Zardes which was missed by Henry Kessler. As the ball sailed over Kessler’s head, the USMNT striker Zardes headed beyond his international teammate Turner. Turner got a strong hand to it but he could only direct it onto the inside of the post and then the opener squirmed beyond him against the run of play in truth.

New England weren’t behind for long though. Just a couple of minutes later, more poor defensive play caused Caleb Porter further frustration. Jonathan Mensah played a weak ball across his own box and Adam Buksa was the first to react, the Pole is coming off of a promising first international break and he fired beyond Room just like Robert Lewandowski would. This took Buksa’s tally for the MLS season to eleven which is one behind the team’s leader and his strike partner Gustavo Bou.

With about five minutes left, Room was on the deck clutching his leg. He was clearly in discomfort and this stemmed from a goal-kick, yet he had to carry on as the Crew were out of subs. Twice Buksa forced Room into making two saves and given that the Crew goalkeeper could hardly move, it was quite impressive to see him play through the pain and preserve that coveted point for his team. Brandon Bye headed on goal with the last play of the game but again, Room maybe risked further injury by carrying on, clutching the ball close and seeing the match out.

Last words on Revolution vs. Columbus

A pair of late saves to preserve a result after picking up an injury (and Columbus being out of subs).

One could easily argue it was two points dropped for New England and the stats back that up, but it just wasn’t to be. Columbus and in particular Room were resolute and now leave Gillette Stadium with a point. It’s not a difference maker on its’ own but it could be a major boost mentally for Caleb’s Crew as they try to battle back into the playoff picture down the stretch.