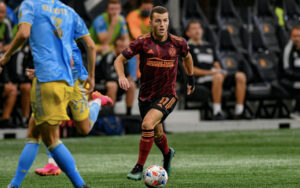 Editorial — Despite throwing away a two-goal lead to draw 2-2 for the second consecutive game, there is plenty of reason to be optimistic about Atlanta United.

That’s according to manager Gabriel Heinze and right-back Brooks Lennon, who are keen to put a positive spin on the Five Stripes’ late collapse to the Philadelphia Union on Sunday.

Atlanta had taken a 2-0 lead thanks to Kacper Przybylko’s own-goal and an Anton Walkes header, the latter coming in the 83rd minute. However, the Union hit straight back with a Cory Burke rebound before Jakob Glesnes unleashed one of the goals of the season from 30 yards out. After drawing 2-2 to Nashville in similar fashion prior to the international break, the frustration was palpable among players, staff and supporters alike at the final whistle.

JAKOB GLESNES DID IT AGAIN

But speaking to reporters after the match, Heinze insisted he’s happy with his team’s overall performance, particularly the defense prior to the collapse.

“I think we defended well tonight,” the Argentine tactician said. At the beginning of the game, we were more vertical in the way we attacked because of the spaces given to us. Afterwards, we were able to attack as well. Each goal, you can look at a different analysis. It’s something that we need to see and something that we need to score one more goal. But this is a team that I want and I’m happy with the performance.”

Heinze added, “I think the team faced a great team in Philadelphia tonight. I believe that, for the most part, we were better. It’s true that after three weeks [off] it’s harder to play. I like the reading of my team. I cannot talk about the result because it is what it is. Now what we can do is keep working.”

In what turned out to be a vibrant attacking performance from Atlanta United in the second half, Brooks Lennon was particularly impressive. The 23-year-old is well-known for his crossing and put that on full display, creating a match-high six chances, two of which yielded goals.

If y’all want to know how important Lennon’s chance creation is to #ATLUTD, take a look at their shot map from the 1st half. Majority coming from the far post on the left

His delivery from the right is great. Lennon *should* get a lot of assists this season if ATL can finish pic.twitter.com/H4LIln8DFF

Earlier in the week, Lennon spoke of the double fitness sessions Heinze had been putting his Atlanta players through in a bid to cut out late mistakes. And in fairness, though Glesnes should have been closed down for the equalizer, his shot only had a 2.85% chance of hitting the net (according to MLSsoccer.com), illustrating just how unlucky the Five Stripes were.

And Lennon insists that, overall, he’s proud of the effort put in by his teammates on Sunday, despite the obvious frustration at the end result.

“We’re obviously disappointed not to get three points tonight,” he said. “Up 2-0 just like our last match against Nashville at home with less than 10 minutes left to go in the game. Obviously, [we are] really disappointed to drop the three points.

“But when you are looking at it from a higher lens, I think the overall performance was good. I’m proud of the boys for how hard we worked. Not only tonight, but in the build-up of the three weeks we had off, I thought we trained very hard and we put everything forth so that we could get a result. It’s just unfortunate tonight.”

Even so, Lennon did admit that Glesnes was given too much space to line up his shot and that closing out games is something Atlanta need to work on if they’re to be serious contenders.

Brooks Lennon says #ATLUTD should have closed down Glesnes.

“In a soccer game, both teams are going to have chances,” Lennon added. “They were able to capitalize on their chances late in the game tonight. I think their second goal was, some people could call it a lucky shot, but we didn’t close him out and didn’t put pressure on him. So, we need to look at that on film and go back and fix our mistakes. And hopefully, the next time we have a 2-0 lead, we can keep it.”

Atlanta have little time to rest with an away trip to NYCFC coming up on Wednesday evening before they host New York Red Bulls on Sunday.