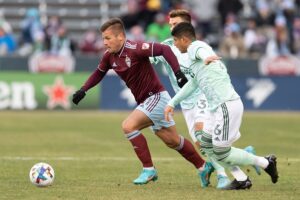 COMMERCE CITY, Colo. – Last Saturday. Dick’s Sporting Goods Park. Colorado Rapids hosting Sporting KC. 21st minute. Diego Rubio cut up field as he saw the ball played out wide. He floated into the space between center backs, holding up his run to stay onside and wait for the pass. He took a touch with just the keeper to beat, then slipped the ball into the bottom right corner. Colorado went on to win 2-0. After three bad games to start the year, Diego Rubio is heating up and ready to lead the Pids up top.

Rubio went 90 minutes just eight times in 2021. He started 26 of 34 regular season games. He struggled with an injury in preseason. Another undisclosed injury in the fall hampered him in the final three months of the season. Rubio has been healthy from the beginning of preseason, scoring regularly. Colorado crashed out of CCL and then expectedly lacked energy in the season opener at LAFC. Now he has two goals and an assist in two straight wins.

“I’m happy to help the team. We need go forward; we need to have more people in the box. That is going to open up spaces. Sometimes you get one opportunity and you need to score. I am trying to be more focused to be closer to the goal this year. The more chances we have the more goals we are going to score,” Rubio told Last Word on Saturday.

That sounds like something out of The Rapids Way op-ed. His first goal of the year was an excellent header, fending off a defender. On his assist, he won a second ball then used his skill to get past two defenders and delivered a perfect ball for Jonathan Lewis to volley. His goal on Saturday was a great run and finish, having missed a similar chance earlier. In two games, he’s played like a striker Padraig Smith imagined in that op-ed.

“He’s been laser focused since the first day of preseason. He’s goal hungry at the moment. One of the most consciences No. 9s I’ve been around,” said Fraser.

The Rapids are the only MLS team currently without a Designated Player. Their one hole from last season was an elite goal scorer. They’ve yet to sign that player with the rumor mill silent. Fans and pundits are wondering if the club will or even can sign that player. In the absence of a Golden Boot contender, or even a Kacper Przybyłko or Gyasi Zardes, the Rapids need solutions from within.

“Diego helps us in so many areas of the field. He helps us build out, he helps us hold the ball, he’s a good passer. He is really determined to do all that get in front of the goal. Over the last few games, we’ve seen a really good version of Diego where he helps all over the field but is still a goal threat constantly, whether it’s he himself or his passing” Fraser elaborated.

As I’ve argued in the past, Fraser’s system requires a striker to do many things. Rubio does all those non-goal scoring things well: He presses, gets under the opponent’s skin, is selfless, and can Concacaf. One of his mantras is ‘every game is a final’ and he plays like it. These traits are extremely valuable.

As the most veteran striker on the team, there are expectations. He’s scored double digit goals just once in MLS, when he was a secondary striker behind Kei Kamara. Fairly or unfairly, he, Michael Barrios, and Lewis will be judged on how many goals they score. Success will be defined on whether this team can finally do it in the playoffs.

The 28-year-old making progress towards scoring 10 goals again. That is a step in the right direction for his personal and team goals for 2022. Tomorrow is another final at Houston Dynamo for him to take another one of those steps.