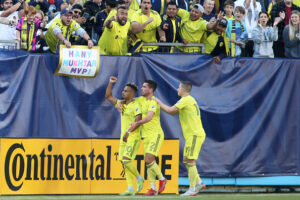 Nashville- When Nashville SC fans make the walk across the Cumberland River and back into Lower Broadway, they’ll be singing about Hany Mukhtar. The German’s performance in Nashville SC’s first-round win was the best thing you’ll in Nashville tonight. His two goals leveled and then won the match for Nashville as they defeated Orlando City 3-1 to move onto the Eastern Conference Semi-Finals.

For the fifth straight game, Nashville SC conceded first when Darryl Dike headed home inside the first 20 minutes of the match. Prior to the goal, it was all Orlando. They had the better of possession, better of the space, and had a deserved lead. But the league MVP candidate Hany Mukhtar then took over.

Both of his goals came against the run of play, and both were brilliant. The first, a shot from a distance that deflected and looped up over a helpless Pedro Gallese. The second was a coast-to-coast run that was made possible due to the excellent run of C.J. Sapong to open up the channel for Mukhtar to run through. He dribbled through the majority of the Orlando defense and put the ball low and to the back post where Gallese couldn’t get to.

It was brilliant. It was an MVP play from an MVP candidate, and it was the most impressive performance in Nashville. Every time Mukhtar got on the ball you sensed danger for Orlando and the ability to turn that into a result was what made the difference.

Orlando had a golden chance to level it up in the 85th minute, but Tesho Akindele missed a wide open volley from the penalty spot. In the third of four minutes of stoppage time, Johnder Cadiz beat his man on a long ball over the top and finished to make it 3-1 sending Nashville to the next round.

In those Eastern Conference Semi-Finals, they will travel to Philadelphia on Sunday evening to take on the Union.