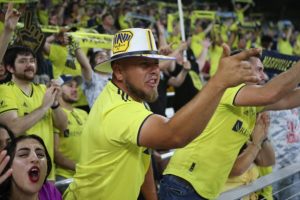 NASHVILLE – Nashville SC hosted Colorado Rapids for the first time ever at GEODIS Park on Wednesday night. The home team was looking to keep their good form going. The visitors were desperate to bounce back from their worst loss of the season on Saturday. Hany Mukhtar once again showed his MVP quality in the end.

Colorado had the better start. Their back four became a back three in possession. A high line was energetic, disrupting Nashville when they went direct. Their passing was accurate and progressive.

NSC however would open the scoring. Randall Leal got into the box in transition in the 26th minute. Lucas Esteves ran into him from behind and Leal went down easily. Hany Mukhtar converted the penalty, even though William Yarbrough guessed right.

The Rapids responded five minutes after the penalty, making it 1-1. Diego Rubio held the ball up at the top of the box, under pressure. He eventually found Steven Beitashour who crossed the ball to Gyasi Zardes inside the six yard box for a tap in.

There was a second penalty shout in the 44th minute. Yarbrough made a great save on Jacob Shaffelburg. Keegan Rosenberry tripped up C.J. Sapong with the ball going away from them and towards the keeper. Nothing was called. The half ended 1-1.

His second of the night puts Nashville back in front. pic.twitter.com/FUTMGvOHtH

Shaffelburg nearly took the lead in the opening minutes of the second half. He pounced on a rebound from a Mukhtar shot, but missed the far post. Nashville turned it on after that.

Mukhtar made a run in behind in the 54th minute. Yarbrough got a piece of the hard and low shot, but it deflected into the top corner. Then it 61st, it all came crashing down. Lalas Abubakar turned the ball over at midfield with numbers up field. Nashville worked quick as two passes got the ball to C.J. Sapong in the box. The first shot was blocked with Shaffelburg right there to bury the rebound, making it 3-1.

Mukhtar finally finished his hattrick in the 75th minute. Nashville again got in transition. Leal forced a great save from Yarbrough. The ball deflected into the air and Mukhtar won it emphatically in the air to score.

The match ended 4-1 with the game turning into a shooting gallery for the home side. Michael Barrios and Daniel Lovitz had a 50/50 challenge in the box that saw Barrios go down with nothing called.

“They took their chances well. I need somebody to tell me what the referees are doing. Every single week  this seems to happen to us. These mystifying calls seem to go against us. Lucas, soft penalty. Barrios, 100% penalty. I’m not making excuses. We didn’t play well enough. I don’t think referees realize how much these calls change games and fates of teams,” Robin Fraser said postgame.

Hany Mukhtar hattrick: I still think Sebastián Driussi wins MVP. But Mukhtar has been worth every penny, recording 19 goals and 11 assist. He’s papered over the flaws of this team. The defense is figuring things out and they’re looking dangerous on set pieces.

Colorado starts great for nothing: Same old, same old for the Rapids. They give up the first goal. They fight back, but make mistakes that get punished. They started brilliantly compared to recent form. It all went belly up when that penalty was called.

“It’s really happened all season. We have good spells throughout the game. When you give away easy goals, simple mistakes, it changes games. We fall asleep too often,” Steven Beitashour told Last Word postgame.