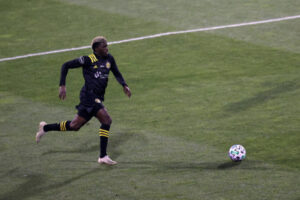 MANAGUA, NI – Columbus Crew SC opened up the Concacaf Champions League Round of 16 on Thursday night. They played on the road at Real Esteli. Crewsgiving proved to be a feast for the Black and Gold as a Gyasi Zardes brace highlighted a blowout victory.

The game opened up with a decent pace. Columbus created chances early and often while Esteli had some good moments on the counterattack through Henry Garcia.

Zardes opened the scoring in the 19th minute. Lucas Zelarayn sent a through ball that the Esteli center backs had trouble with. Zardes took the loose ball away and beat goalkeeper Alvaro Rezzano with a low shot the far post.

Jonathan Mensah made it 2-0 on a corner minutes later. The corner was taken short. Mensah didn’t get great contact on the ball but it bounced off the ground and up over everyone’s head to go in. Zardes made it  3-0 in 33 minutes, set up by Luis Diaz right in front of goal.

Columbus drew a penalty on a handball just before halftime. Mensah headed the ball off a set piece and it went right off his marker’s outstretched hand. Pedro Santos took and converted the spot kick.

No team scored in the second half but things started to get physical. Columbus played more conservatively, inviting pressure. Esteli had several good opportunities but was unable to score. Things got worrying with goalkeeper Eloy Room taking a hit in the air on a set piece and several Columbus players getting yellow cards.

Gyasi Zardes AGAIN! @ColumbusCrewSC is off to a flying start

Champs look sharp: Columbus showed their class in the first half with the four goals. They created a bunch of chances. Despite missing a few starters, the defending MLS Cup champions looked the part.

Teammates shows toughness: Esteli tried to do some Concacaf-ing, especially in the first half. Late and chippy tackles. Aidan Morris took a shot to the head out of bounce with the referee not there. Columbus stood up and defended their teammates when needed.