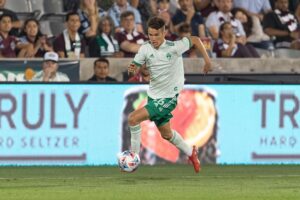 EDITORIAL – Last Sunday afternoon, Cole Bassett scored his first goal since July 17. It was a well taken penalty which led to a 3-1 comeback win down a man at Minnesota. The return of #GoalBassett was a relief for the player, head coach Robin Fraser, and the team.

#GoalBassett has returned, hopefully signaling a turn in form for Cole Bassett

“I wanted the pen. I had the confidence to step up and take it,” Bassett told Last Word on Soccer on Sunday evening.

“It was a big relief for me to score. Most people know by now I’ve hit way too many posts [this year]. The good thing is that I’ve continued to get into positions to actually do that. That’s the biggest talk I’ve had with the coaches, to continue to do what I’m doing.”

Bassett’s had an up-and-down year and a half. In 2020, he co-led the team in goals with five and led the team in assists, also with five. He continued to make timely late runs into the box to score. He was good on set pieces.

Things have dried up in 2021. He’s played almost twice as many minutes so far this year as he did last season. He has just four goals and three assists. He leads MLS in posts hit from the run of play. He’s massively underperforming his G-xG at -3.15 according to American Soccer Analysis.

Now, his role has evolved in 2021. Bassett’s played on the wing and as a No. 8 more than at as a No. 10 or almost a second striker like in 2020. He presses well and his situational and positional awareness have been better.

Fraser has experimented tactically with a number of players who are flexible, not just Bassett. This has complicated things for Juanners and other Rapids fans who like online gambling. It’s been difficult to predict goal scorers, stats, and score lines. Squad rotation and offense by committee have been a hallmark of this team.

Bassett also has not been a regular starter this year for a number of reasons. There’s competition for playing time. There’s value in having a fit 20-year-old who can do a bit of everything and cover ground, including off the bench.

Has his scoring production reduced in part due to worse finishing? Yes.

Has he been given different assignments that prioritize other tasks over scoring at times unlike last year? Also yes.

Did all the rumors about him potentially transferring to Europe affect him? It’s plausible.

Is this goal what he needed to kickstart his season just in time to help the Rapids make a run in the playoffs? That’s up to him.

The post #GoalBassett has returned, hopefully signaling a turn in form for Cole Bassett appeared first on Last Word On Soccer.