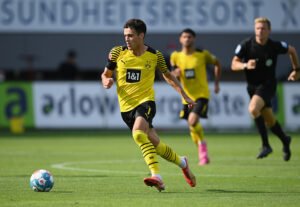 Only two Americans remain in the race for the 2021 Golden Boy Award. This is Gio Reyna and Yunus Musah.

Tuttosport trimmed its list down to 60 players on Wednesday, which saw U.S. men’s national team players Gio Reyna and Musah remain. Among some of the top European names left is Barcelona’s Pedri, Arsenal’s Bukayo Saka, and Rennes’ Eduardo Camavinga.

Reyna heads into his second full season with Bundesliga side Borussia Dortmund and his third overall. The 18-year-old scored four goals and added six assists in 32 appearances for Borussia Dortmund last season, winning the German Cup.

The American starlet earned his first eight caps with the USMNT, scoring four goals and establishing himself as a starter for the U.S. during the Nations League-winning campaign. Reyna was also named to the tournament’s Best XI.

He has also been given the No. 7 jersey in Dortmund following Jadon Sancho’s move to Manchester United. Reyna scored his first league goal of the 2021-22 Bundesliga season in a 5-2 romp over Eintracht Frankfurt on opening day. The New York native will also take part in the upcoming UEFA Champions League this fall as Marco Rose’s side aims for a deep run in the competition.

NEWS: @YunusMusah8 commits to the #USMNT.

Musah’s nomination comes after a breakthrough first professional season with Valencia in which he made 32 appearances, playing more than 1,500 minutes as a winger and midfielder. Internationally, Musah has earned six caps with the USMNT after representing England at various youth levels.

The midfielder has not yet featured in the new La Liga campaign due to injury. Musah, 18, is not expected to be named to Gregg Berhalter’s USMNT roster for September World Cup Qualifiers due to his recovery.

Fellow American players Bryan Reynolds and Folarin Balogun were also on the original list of 100 players, but have not made the cut in the final 60. Reynolds is currently with Serie A side AS Roma while Balogun appeared in Arsenal’s Premier League opener at Brentford.