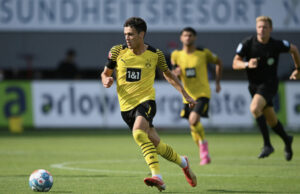 For many American players it will be the final domestic action before the start of Concacaf World Cup Qualifying and many will have a point to prove this weekend.

Gio Reyna and Borussia Dortmund welcomes Hoffenheim to Signal Iduna Park on Friday, looking to rebound from back-to-back defeats. Reyna has one goal under his belt in the new season and will be eager to deliver a strong outing against a Hoffenheim side looking to move up the Bundesliga standings themselves.

Mark McKenzie and Genk faces off with defending league champions Club Brugge on Sunday, looking to earn a third-straight league victory. McKenzie played the final 10 minutes in Genk’s 4-0 win over OH Leuven back on Aug. 14 before the club’s scheduled match at Royal Antwerp last weekend was postponed.

Elsewhere, Julian Green and Greuther Furth aims to pick up their first win back in the Bundesliga while Tyler Boyd aims to make his debut for loan club Rizespor.

Here’s a closer look at this week’s Top Five to Watch.

Borussia Dortmund is coming off back-to-back defeats and will aim to to head into the international break on a high note. Gio Reyna and the rest of his Dortmund teammates welcome Hoffenheim to town on Friday, knowing their opponents are unbeaten in the new campaign. Reyna has one goal to his name in the new season, but needs to do more in the final third if he wants to avoid any early season criticism.

The U.S. men’s national team winger still has a long season in front of him, but a strong outing against Hoffenheim could help grow confidence before international duty.

Genk has used several defenders in its backline so far this season and Mark McKenzie is one who will hope for more playing time. McKenzie started the first three competitive matches for Genk earlier this summer, but since has only totaled 75 minutes in league play. The versatile center back watched as his club fell out of the Champions League qualification round to Shakhtar Donetsk before playing the final 10 minutes against OH Leuven back on August 14.

McKenzie is one player who will want to boost his stock ahead of World Cup Qualifying and a start against Club Brugge on Sunday could be just the what the remedy.

Greuther Furth is another Bundesliga club looking to turn things around and Julian Green will be in the mix to do so. Green has watched Furth lose two of its opening three matches in competitive play, being thumped by Stuttgart 5-1 on the opening day of the Bundesliga season. The veteran midfielder was key to Stefan Leitl’s squad in the second division and now will be expected to rise to the occasion in the top flight.

Green’s status with the USMNT remains unknown heading into the future, but if he is able to lead Furth to safety this season, it could be the major boost he needs to get more notice.

Norwich City rolled into the third round of the Carabao Cup with Josh Sargent shining in his first start for his new club. Sargent will now look for increased playing time in Premier League action as the Canaries welcome Leicester City to Carrow Road on Saturday. The USMNT striker teamed up nicely with several of his new teammates in Tuesday’s 6-0 romp over AFC Bournemouth, scoring twice and assisting once.

Sargent showed good skill in the box to tuck away his chances and now could get the green light to start with Teemu Pukki on Saturday. Leicester City is coming off a humiliating 4-1 loss to West Ham United, giving Norwich City added confidence in possibly earning their first win of the league season.

Joe Scally has continued to impress in his early opportunities with the Borussia Monchengladbach first team, but now has a golden chance to return to his natural left back spot this weekend. Stefan Lainer’s injury now opens the door for Scally to start at left back for Adi Hutter’s side as Gladbach visits Union Berlin in its final match before the two-week break. Scally has started in all three competitive matches for the club, but was handed a lesson in Gladbach’s 4-0 road defeat to Bayer Leverkusen last weekend.

The 18-year-old is quickly rising into the next eye-raising American talent in Europe and will be eager to help the club bounce back.