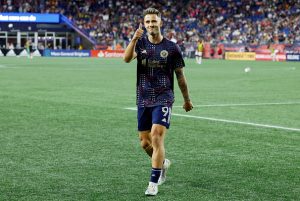 A few days prior to the New England Revolution’s clash with Atlanta United, the former still had a glimmer of hope. Any playoff ambitions were then extinguished completely as Inter Miami won away at Toronto FC on Friday night. Attentions can turn to next year but for the time being, Giacomo Vrioni and Gustavo Bou found the back of the net to win the final home game of 2022.

A Lack of Jeopardy

It wasn’t the case when Bruce Arena would have been prepping his side, but by kick off, this fixture was meaningless for the Revs. Atlanta United still had their playoff dreams alive until they fell in this one, at Gillette Stadium.

Giacomo Vrioni, after a back and forth with captain Carles Gil took the chance to open his account from the penalty spot. A sensational strike from Josef Martinez made it 1-1 before Gustavo Bou netted the winner, five minutes from time.

Head coach Bruce Arena praised his players for approaching this professionally, despite the lack of jeopardy. “You could roll over and die the last few games of the season and the fact that they came out and fought for 90 minutes, says a lot about the character of the group. And for me, it’s encouraging as we hit the offseason in another week and we plan for 2023.”

Arena made a few changes for this one, Vrioni making a first start as well as scoring a first goal. Whilst Carles Gil was making his 100th appearance for the Revolution, brother Nacho also made his first start. This makes them the first brothers to play in the club’s history. Elsewhere, DeJuan Jones was sidelined with an upper leg injury so Ryan Spaulding entered the fray at left-back.

On the flipside, all the headlines in Georgia are regarding Josef Martinez. The Venezuelan forward is one of the greatest ever players to grace these shores, but there may well be trouble in paradise.

He scored a sensational overhead kick against the Revs and after the game, it was reported that he “Has requested to meet with ATLUTD’s front office at the end of the season to determine his future in Atlanta” (as per Michele Giannone and Felipe Cardenas).

Signing a player from Juventus is no mean feat. It just hasn’t worked out for Giacomo Vrioni yet in New England and this is simply due to injuries. A number of key players have spent time in the treatment room with the Albanian striker being one of them. Vrioni had to persuade Gil to late him take the penalty that he won, and he came good, sending Raul Gudino, the man who gave away the spot-kick, the wrong way.

“In the beginning he said no, but I asked him again and he gives me the ball. I have to say thank you to him. I scored so he was happy, and I was happy.” These are the words of the 23-year-old on his first-ever goal for the Revs. Hopefully it is the first of many.

Living for these moments

Arena was positive after the game about what is to come from the Designated Player next season. “He’s got a way to go, but it’s encouraging to see. I’m thinking ahead and getting him a full preseason with our team, getting him fit. I’m encouraged that he can be a real positive for our team.”

All in all, whilst the result is a moot point at this stage, it was a good outing. Giacomo Vrioni and Gustavo Bou have both had injury issues to date so with the former opening his account, and the latter becoming outright top scorer on the team, there is a hint of positivity. The final game of the season is a visit to Chicago next weekend and then they shall go again in 2023!

The post Giacomo Vrioni Opens His Revs’ Account In Win Over Atlanta United appeared first on Last Word On Soccer.