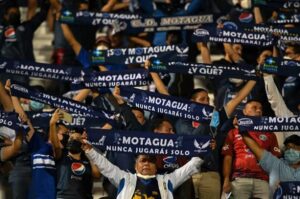 The Major League Soccer season might not start until the end of February, but for some teams their campaigns start a little earlier. Seattle Sounders are one of the teams that fit into this category – they have a two legged tie in the CONCACAF Champions League (as do NYCFC, Montreal, Colorado Rapids and New England Revolution, it should be said). Let’s take a look at their Round of 16 opponent Fútbol Club Motagua.

Who are FC Motagua?

The CONCACAF Champions League is always a fascinating competition – particularly for an English fan of MLS such as myself.

The teams from Central America are ones I’ve often not heard a lot about before, and I love being able to research new teams that the MLS franchises come up against.

The Sounders have drawn Fútbol Club Motagua from Honduras in their tie, with the first Leg to be played in Honduras at the Estadio Tiburcio Carias Andino in Tegucigalpa – the capital of Honduras.

Motagua play in the Liga Nacional – the highest professional league in Honduras. The ten team league is broken into the “opening” and “closing” competitions in Fall and Spring respectively.

Motagua were formed in 1928 and their main rivals are Olimpia (who have also played in this competition many times).

Their manager is Diego Vásquez, and the Argentine has been in charge there since 2013 – achieving a nomination for COTY in the 2018 CONCACAF awards.

Who should the Sounders be wary of? Well, a high number of the Motagua squad are Honduran natives, but they will have to be on their guard against Roberto Moreira – the Paraguayan forward who has played for Motagua since 2018. He’s chalked up 50 goals in 110 appearances – almost one goal every other game – which is an impressive record.

Their captain is their goalkeeper – Jonathan Felipe Rougier – who has over 150 appearances for the club since 2017.

Their new signing Ángel Tejada is well travelled in the Honduran league, but scored 16 goals in 35 games last campaign for Vida, so he will also be a threat if he lines up against the Sounders.

It’s sure to be a hostile and intimidating atmosphere for the Sounders players in two weeks time – and it will be interesting to see how they cope with the pressure that Motagua will put them under straight from the off in Tegucigalpa on February 17.