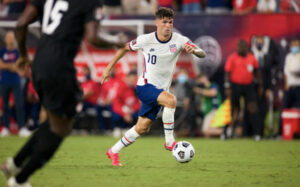 Frustration loomed over the crowd in Nashville, Tennessee, on Sunday night. The USMNT, hosting their first World Cup qualifying match of the Octagonal, drew with Canada, 1-1, splitting the points. The U.S. opened up World Cup qualifying with a scoreless draw against El Salvador.

That gives them two points in the Octagonal. The top three teams will automatically qualify, with the fourth-place team facing off in a playoff. The U.S. is slotted, currently, in fifth place after the draw. Panama and Mexico picked up wins on Sunday night in their respective matches.

There are four teams with 2 points: Canada, the USMNT, Honduras and El Salvador.

Brenden Aaronson tried to change that in the second half against Canada. In the 56th minute, a foul against Christian Pulisic was ignored by the referee and the advantage was played for the U.S. The ball found Antonee Robinson on the left side of the flank, and he sent it in for the sliding tap-in from Aaronson, the former Philadelphia Union man.

Canada responded almost immediately, though, silencing the crowd in Nashville. Almost identical to what Aaronson’s goal looked like, Alphonso Davies found Cyle Larin in the box for a tap-in — although this one not sliding.

Canada had a chance to put the match away in the 78th minute. Tajon Buchanan simply out-ran John Brooks — who was playing conservatively with a yellow card — and took an open shot, albeit at a difficult angle. His shot went wide, leaving the match at 1-1.

Both teams will leave Nashville with 1 point apiece.

Three Takeaways from USMNT vs. Canada

What’s next for the U.S. and Canada?

Like Pulisic said, it’s time to move on to the next games. The U.S. will hit the road and face Honduras on Wednesday night at 10:30 p.m. ET. Meanwhile, Canada will return home to take on El Salvador at 7:30 p.m. ET.

Brilliance from Davies! He sets up Cyle Larin for the goal and we’re all tied up at 1! pic.twitter.com/AfLSI8H6a3