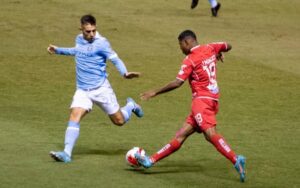 Los Angeles, California – Following two goals in the opening leg, NYCFC returned to the United States and scored four more in the second leg to beat AD Santos on aggregate 6-0 and advance to the quarterfinals of the Scotiabank Concacaf Champions League.

NYCFC add on two in the first half

Dominating the opening minutes, NYCFC would finally break through and add to their first leg tally in the 32-minute. After winning a corner, Maxi Moralez was able to whip a cross in near post finding a springing Alfredo Morales to slam in the header for a Moralez to Morales goal, 1-0 NYCFC.

It wouldn’t take long for a second to come as in the 36-minute after winning yet another corner Moralez played another ball in finding Valentín “Taty” Castellanos just inside the box. A deflected shot from Castellanos fell to the foot of Maxime Chanot who placed it between two Santos defenders to put NYCFC up 2-0 before closing out the half.

GOAL, @NYCFC! That’s two for the “home” side, as NYCFC doubles the lead courtesy of Maxime Chanot. #NYCvSGU | 2-0 | #SCCL pic.twitter.com/BRce8eLrds

Talles Magno with the finishing blows

Coming out in the second it was Santos that would open the pressure in the 52-minute as some quick passing at the top of the box dropped the ball back to a midfielder for a shot from distance that rifled just off Sean Johnson’s right post. Scrambling to it was Malte Amundsen just able to touch it out before a Santos attacker to concede a corner that wouldn’t be converted.
Making his return from injury in the 55-minute, Keaton Parks subbed in Moralez marking his first time back for NYCFC since prior to last season’s playoff campaign.
Moving into the 80-minute, Thiago Andrade was able to break free on the wing and beat his man to the touchline, working a ball across the box to Talles Magno one-on-one. Sliding in, Talles Mango just got a foot to it, bouncing it over an outreaching Santos defender and beyond the keeper for goal three on the day, 3-0 NYCFC.

Goal, @NYCFC! Brazilian Talles Mango gets the third goal on the board. New York leads on aggregate, 5-0.#NYCvSGU | 3-0 | #SCCL pic.twitter.com/tBHZpRBKID

Keeping the pressure up, NYCFC would win an 85-minute free-kick from just outside the box, beautifully hit by Castellanos but kicking off the right-side post. And in the 86-minute, some poor distribution from Santos’ goalkeeper was knocked away by Castellnos and to the foot of Talles Mango breaking into the box. A fast and low shot from Talles Magno caught the keeper off guard and secured goal number four on the night for New York City.

Goal, @NYCFC! Two for Talles Magno and that brings New York up to four (and six on aggregate!).#NYCvSGU | 4-0 | #SCCL pic.twitter.com/YJUVTpZBwk

Historically, MLS clubs have struggled in Concacaf’s Champions League with some suggesting NYCFC might be the league’s best shot at a title in the past few seasons. While Santos isn’t as tough as the competition NYCFC will face in Liga MX-based clubs, they certainly passed their first test with a dominant 6-0 victory.

In the quarterfinals, they’ll face Comunicaciones, a Guatemalan team who took down a tough Colorado Rapids side in the opening round on penalties. NYCFC should be tipped as favorites but need to keep that edge they had against Santos if they want to hang around in this tournament.