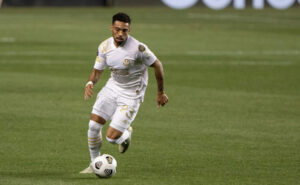 Where last season the Five Stripes lacked backbone, they’re now among the best defensive units in Major League Soccer. And the build-up play is far more attractive to watch, with Atlanta bravely constructing moves from their own box and passing with precision and authority.

As a team, things look good and it’s only a matter of time until results follow. But what about individual players? Heinze has added serious quality in the form of Argentine midfielder, Santiago Sosa, while DP center-back Alan Franco will surely make his mark on the side soon.

Here, we take a look at four pre-existing Atlanta United players from Heinze’s ‘inherited’ squad to see who have been the biggest winners so far.

Note: Emerson Hyndman was originally intended to be included but was omitted due to his ACL injury.

Over the past couple of years, Miles Robinson has become known as a top-class one-on-one defender. There are few better in these situations throughout MLS, with the 24-year-old’s pace and composure enabling him to stay on his feet and track opposing attackers until the chance to steal the ball presents itself.

But what has really set Robinson apart this season is his passing. In the 2-2 draw with Nashville last time out, it was his long-range, defense-splitting pass that put Marcelino Moreno through to make it 1-0 inside six minutes. The pass was almost Virgil van Dijk-esque, such was its range and precision.

Miles Robinson’s pass map from the first half (via @MLS)

Getting in plenty of those #SantiagoSosaSwitches

In fact, Robinson has played more passes into the final third (40) than any other Atlanta United player this season, while he’s second only to Moreno (37) for progressive passes (36). He’s also carried the ball 1,615 yards toward the opposition goal in 2021, at least 477 yards further than any of his teammates.

Whether it’s starting attacks with a line-breaking pass or carrying the ball out of pressure, Robinson has answered all those critics who said he couldn’t play. There is now well-deserved clamor to call the center-back up to the national team.

We could just as easily have looked at Robinson and Anton Walkes as a partnership but such has been their form, they deserve individual analysis. After all, the off-season addition of Franco left most thinking Walkes would have to settle for a place on the bench. Instead, he’s formed a rock-solid partnership with Robinson that has been a big reason behind the Five Stripes’ impressive defensive performances.

While Walkes is by no means a poor ball-player, it’s his ability to match Robinson’s defensive output that has turned so many heads since Heinze’s arrival. Right across the metrics, the Englishman stands up to his counterpart, with the two making a joint-team-high 20 interceptions, Walkes applying more pressures in the defensive third (53) than any of his teammates and coming second only to Robinson (17) in terms of blocks (16).

Halted the Seattle attack all 90′. Great performance from @antonwalkes

They’re just a few metrics to whet the appetite. It’s only when you take the eye test that you truly appreciate what Walkes offers. When Robinson takes the ball out, he provides security behind. When Robinson goes up for a header, Walkes is there to win the second ball.

The two have formed such a good understanding that it’s no wonder Franco is stuck on the bench. After struggling last season, Walkes deserves immense credit.

One of the biggest struggles for the Five Stripes in 2020 was replacing the creative output offered up by Julian Gressel, who departed for DC United. Through the 2019 regular season, Gressel provided no fewer than eight assists for Josef Martinez, leaving them two clear of any other partnership in MLS. Sure, having Martinez himself out last year didn’t help either, but there’s no doubting better deliveries would have helped even Adam Jahn score more goals.

This season, Brooks Lennon has been fully integrated into the squad and, slowly but surely, it’s starting to make a difference.

Sure, Lennon is yet to provide an assist, but he has already created 16 chances (at least seven more than any other player), 13 of which have been from open-play crosses. These chances have generated 0.20 Expected Assists per 90 minutes so far this season, leaving him behind only Jurgen Damm (0.46) and suggesting he should set up a goal once every five games. Lennon also won the penalty that allowed Martinez to equalize against the Seattle Sounders recently.

There is work to do defensively. For example, Lennon has managed just two tackles from the nine occasions where an opponent has attempted to dribble past him. But Heinze doesn’t necessarily pick Lennon for his output near his own box. That’s what Robinson and Walkes are there for. What Lennon offers at the other end of the pitch should make him an invaluable piece for the Five Stripes moving forward.

Jake Mulraney has started in five of his seven appearances so far, but has just 408 minutes under his belt this season, leaving him very much in the middle of the pack. He’s often one of the first to be substituted but that doesn’t mean he isn’t enjoying a fine start to the season.

Like Lennon, Mulraney struggled to fully integrate last season but his very specific skill set has made him a very useful attacking weapon for Heinze.

From the bench, Mulraney offers a real change of approach. The Irishman is one of the few players in Atlanta’s squad willing to cut inside when going one-on-one with opposing defenders, starting on the right and shifting onto his left foot to get shots on goal.

But he’s equally effective going on the outside and providing crosses on the opposite flank. In fact, three of his eight chances created this season have been crosses, including the one to set up Moreno’s dramatic late winner against CF Montreal in May.

He isn’t the quickest. Nor is he the most attractive name on an MLS roster. But Mulraney has a superb left foot that makes him goal dangerous and creative, generating 0.33 Expected Goals per 90 so far. With that sort of output, the raw goal and assist numbers are sure to follow.