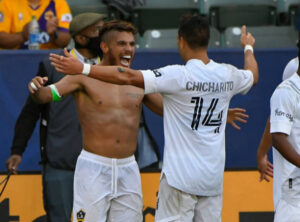 EDITORIAL – The LA Galaxy have won three of their first four games of the MLS season. Javier Chicharito Hernandez has scored six of the Galaxy’s eight goals. He had the winning assist over the weekend in El Tráfico. Yet, all three wins have been by one goal. Their only game against a good team was a blowout loss. On performance, are LA Galaxy great right now? No. Does it matter right now? Absolutely not.

Are LA Galaxy Great Right Now? No. Does it Matter? Nope.

The first two games of the season were against teams that are a work in progress, in Inter Miami and New York Red Bulls. Then they got embarrassed by Seattle Sounders in a result head coach Greg Vanney took the blame for with his tactical game plan. Saturday afternoon, they defeated LAFC at home 2-1 in a tightly contested game where (as usual for El Tráfico) the Galaxy didn’t play great at times but found a way to win with some late game heroics.

Per MLSSoccer.com’s xG model, the Galaxy have only had the higher expected goals in one of four games so far. It was against RBNY (1.8 to 1.1) and Red Bull could have had a late penalty call to earn a draw.

On the other hand, part of Chicharito’s magic is opportunistic goals. Also, the Galaxy have been played with a lead for a good amount of time so far, so understandably the opponent has had to chase the game and created more chances in the process.

Vanney’s team isn’t even settled yet. Derrick Williams was a key off-season defensive signing at center back. He played in just his second game over the weekend. Several other signings have had visa issues such that they haven’t even set foot in Dignity Health Sports Park yet. Kévin Cabral and Séga Coulibaly have yet to make their debuts.

The defense is still leaking goals. There’s no starting caliber No. 6 on the roster who can paper over those cracks. Winning games 3-2 isn’t sustainable if you want to make the playoffs in MLS. Vanney and the new defensive signings still have some work to do. Clean sheets need to become plausible for this unit.

They also need to become better at creating shots and goals for people beside Chicharito. The new wide signings getting integrated will help with that. Those players will compliment Víctor Vázquez and Sebastian Lletget, even take some of the load off their shoulders.

But for now, they’re finding ways to win even if its not reliable for the long term. Chicharito is feeling himself, rightfully so. They’re scoring goals, playing entertaining soccer, and picking up points. That’ll go a long way to them making the playoffs, building confidence (fake it till you make it), and being the building blocks for a more complete team.

The Galaxy are winning right now. Are they playing great? Not exactly. Does it matter? For now, no. Eventually? Absolutely.

The post Form or Fallacy: Are LA Galaxy Great Right Now? No. Does it Matter? No. appeared first on Last Word On Soccer.