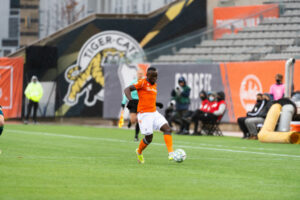 HAMILTON, ON – Forge FC equalized with two goals late at Tim Hortons Field. This was thanks to late goals from Kwame Awuah and Joshua Navarro.

Both of #EstoEsMotagua’s goals came from set pieces.#ForgeFC scored two late goals to get the draw at #TimHortonsField.

Forge FC played better in the second half compared to the first half. #FORvMOT | 2-2 | #SCL21

It was a pretty even game in the first eight minutes. Marco Tulio Vega committed a foul in the 10-minute. Pacius was called offside in the 16-minute. Hamilton played good defence on Lopez in the 17-minute. Triston Henry made a mistake coming out, which almost cost Hamilton a goal.  Triston Borges made a good challenge, which ended with Woobens Pacius shot just being off-target. Kyle Bekker was the one who made the chance possible for Pacius. Awuah showed great anticipation skills by stealing the ball in the 33-minute. A shot in the 36-minute missed the target. Ma Babouli shot missed the target.

Motagua’s Kevin Lopez got a goal from a cross. Another Motagua player got a touch to the ball, which allowed Lopez to get possession of the ball. He then kicked the ball into the back of the net.

The pass to Triston Borges in the 57-minute was not completed. No real chances for Motagua to start the second half. Elimane Cissé got a yellow card in the 63-minute, which means he will be out of leg two.

64’ #EstoEsMotagua adds another goal on the road! From a cross, Marcelo Periera puts the header into the back of the net! #FORvMOT | 0-2 | #SCL21 pic.twitter.com/8TtCtmbzi9

Motagua’s Marcelo Pereira (slight misspelling on my Tweet above) got a header following a cross to give Motagua the lead. Maybe Triston Henry could have saved it, but it was from very close range. Kyle Bekker failed to clear the ball, which then put Hamilton in a bad situation in the two-legged tie.

Hamilton gave up a goal in the 75-minute. Motagua’s Vega mishandled the ball. Henry made a good save in the 79-minute. Forge’s Babouli’s shot in the 80-minute was blocked, should have shot the ball earlier. The arm was away from his body in the 81-minute. Henry’s shot in the 81-minute almost went into the back of the net.

Bekker though made up for his mistake in Hamilton’s first goal. He played a big role in Hamilton’s first goal. His cross was met with Joshua Navarro’s header and went into the back of the net. This is the same player who played a critical role in Hamilton getting the Canadian Premier League playoff win over York United FC. Hamilton then got the game-tying goal. This was when David Choinière shot was stopped, but a rebound was there for Awuah to tie the game.

Hamilton and CPL fans probably heaved a sigh of relief. At one point in the game, it looked like Forge was out of the two-legged tie. However, getting those two late goals really helped Hamilton keep their Concacaf League Final hopes alive. The game will be played on December 1 at 8:00 p.m. ET. It will be shown live in Canada on OneSoccer and Telus. The second leg will take place at Estadio Tiburcio Carías Andino in Tegucigalpa, Honduras.

90+4’ #ForgeFC gets a goal just before the game ended! David Choinière’s shot was stopped, but the rebound went to Kwame Awuah for the game-tying goal!#FORvMOT | 2-2 | #SCL21 pic.twitter.com/LZlUTfpalW

Forge FC remains unbeaten at Tim Hortons Field. It looked like yesterday would be the night that Hamilton would lose at home. However, Forge got two late goals scored by Awuah and Navarro, Hamilton equalized the first leg in Hamilton. Overall, they currently have four wins and two draws at home in Concacaf League play at Tim Hortons Field.

F.C. Motagua remains unbeaten in Concacaf League play. Motagua was riding a three-game winning streak before facing the CPL-based side in Hamilton. This includes defeating Honduran rivals C.D. Marathón. Marathón was the same team that prevented Hamilton from advancing to the 2020 Concacaf Champions League.

Set pieces defined the game for both teams. Three of the four goals scored were from set pieces. This includes both of Motagua’s goals, which came from crosses. In the first goal, a Motagua cross, which deflected of a Hamilton player went to a Motagua player from close range to score the goal. The second one came from a free kick that ended with a Motagua goal.

Photo credit to Ryan McCullough of Forge FC on November 21, 2021.