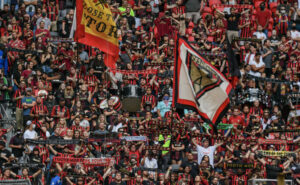 “It’s beautiful to see so many people in the stadium. It’s been a long time without seeing this. And football is for [the] people,” Gabriel Heinze said following Atlanta United‘s dramatic 1-0 win over CF Montreal on Saturday.

In a game that featured a combined four shots on target, the soccer was arguably a distraction from the main event of the evening: a capacity crowd at Mercedes-Benz Stadium. With only the arena’s top deck closed, 40,116 fans made their presence felt. It was the highest attendance for any soccer match on the planet since the start of the COVID-19 pandemic.

Though limited crowds have started coming back to most MLS stadiums, this was the first time that many Atlanta United supporters have seen each other since the start of 2020. For most, it was an emotional evening and a welcome return to normality.

“Hanging with and hugging friends at the Resurgence tailgate, along with being back in MBS is the most ‘normal’ I’ve felt in over a year,” Wayne Melnick of the Resurgence supporters group told Last Word on Soccer.

While the atmosphere in the stands was electric, with commentator and former United States international Maurice Edu describing the “A-T-L” shout from the crowd as “amazing,” the game itself so very nearly turned into another night of frustration for Atlanta United.

What a moment! 40k+ in attendance waited till the 94th minute before they got their moment and what a moment it was! Welcome home 17s!

Heinze’s side managed just one shot on target until the 94th minute. Although they dominated possession for large parts of the match, Montreal were able to hold their defensive line and thwart their hosts.

But soccer with supporters is a different animal. Away from Expected Goals and possession stats, there are intangibles and higher forces at work that means a game is never over until the final whistle. Even as wave after wave of Atlanta pressure washed up on Montreal’s defense, it felt inevitable that the Five Stripes would get one more chance.

“The last 15 minutes, you could feel it become a rolling boil,” Melnick said. “By the time we got into added time, it was as if the fans were pulling the players along with them, willing them to get downfield and put the ball in the net.”

Marc Nicholls of ATL UTD Fan TV added, “When the team pushed forward for one more attack, you could hear the crowd willing the team on.”

In the final minute, everything seemed to fall in place. George Bello controlled a Santiago Sosa pass brilliantly to get Atlanta moving. When Jake Mulraney got the ball, he didn’t even need to look, delivering a pin-point cross onto the head of Marcelino Moreno, who had travelled from the halfway line without a single Montreal player picking him up.

Whether it was the accuracy of Moreno’s header or the sheer force of will from supporters behind the goal, there was no way the ball wasn’t ending up in the back of the net.

“When the ball crossed the line, the sound was deafening! Beer showers aplenty,” said Nicholls.

Melnick added: “When Moreno scored, the lid just came off. The joy on the field was nothing compared to what we were experiencing in the stands. It was as if the players, the coaches, the capos, the drummers, the supporters, and the fans all United (pun intended) and found the way to win. And I’ve got the wonderful blisters from the bass drum mallets to prove it.”

The past year has affected people from all walks of life in different ways, including professional soccer players. After the goal, Moreno could be seen wiping away tears, proving just how much of an emotional moment this was for all involved. Especially for a player who had to leave his native Argentina to join Atlanta United during a global pandemic.

Moreno literally teared up at the end

That goal meant a lot. The full crowd might have played a part too… #ATLUTD pic.twitter.com/ThOfhgnF6E

“He’s a very sentimental player,” Heinze said of Moreno. “He’s going to try many times. You can see that he wants to help the team even more. And today he showed one of the nice things of the sport: that after so many tries, it happens. I’m happy for him.”

Goalkeeper and club captain Brad Guzan added, “I don’t think anyone expected him to pop up in the box and score with his head, we will certainly take it. That shows his commitment to the group and the team, but shows his willingness to get in the box and his desire to want to score. Whether it’s cutting in or getting to the end line and crossing balls. ”

When asked about what the goal meant on a personal level, Moreno refused to take the credit. Instead, he praised his teammates for playing a “great game”, pulling together as a squad under unique circumstances.

“I’m going to take myself out of it personally,” he said. “As a group, we played a great game tonight and we deserved the victory.”

And that’s the key. As Melnick said, every single person in the Benz on Saturday can claim a small part of this victory. One laced with emotion. One that has the potential to pull Atlanta’s fervent supporters closer to the players and their new coach.

The best soccer teams are forged in adversity but on Saturday, Atlanta United proved they are just that. United. Able to ride the storm and hang in there to do what needs to be done.

More than a simple 1-0 win over Montreal, Saturday night might just be the start of something special for the Five Stripes.

The post “Football is for the people”: Atlanta United beat CF Montreal on emotionally charged night at full MBS appeared first on Last Word On Soccer.