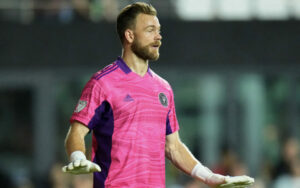 For the first time ever since its inception last year, the Florida Derby has ended in a scoreless draw. Neither Orlando City SC or Inter Miami could find the back of the net in Friday night’s 0-0 draw at Exploria Stadium.

Tesho Akindele stood at the penalty spot in the first half after Nicolás Figal was called for a hand ball inside the box. Akindele fired but Inter Miami goalkeeper Nick Marsman made a stellar save. Both goalkeepers, Marsman of Miami and Pedro Gallese — who just returned from the MLS All-Star Game this week — of Orlando, made two saves each.

However, it was Marsman’s save against the Canadian striker that made the highlight reel.

Of note for Orlando, Daryl Dike made his return from injury at halftime, subbing on for Akindele. Meanwhile, new Argentinian signing Emmanuel Mas got some minutes after swapping for teammate Joao Moutinho in the 89th minute.

As for Miami, the team is currently riding a positive wave of three games unbeaten. Their winning streak is over, but they have now wrapped up seven points in their last three matches. Phil Neville welcomed back Rodolfo Pizarro, who also attended the All-Star Game in Los Angeles, where MLS topped Liga MX on penalties.

Marsman was the star of the show for Miami, making some incredibly acrobatic saves and blocks in goal.

What’s Next for Orlando and Miami?

For Miami, it’s all about continuing with a trend upwards. Inter will head on the road to Cincinnati on Sept. 4, next Saturday, for a 8 p.m. ET match time. Cincinnati lost their rivalry match against Columbus, 3-2, in the Hell is Real Derby. Miami returns home on Sept. 11 to host the Columbus Crew.

Meanwhile, Orlando City will host the Crew at home on Sept. 4 at 7:30 p.m. ET. Last Word on Soccer will have coverage from Grant Miller, while Rachael Kriger will be at the game snapping photos. Then, on Sept. 10, Orlando City SC will head up north for a short trip to Atlanta on Sept. 10.